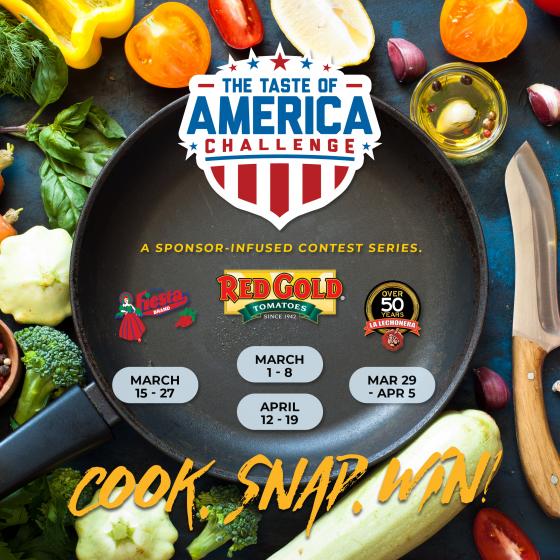 Good news for competitors who have yet to qualify into WFC2022! Taste of America will be returning for a seventh year as the largest online recipe qualifier in the WFC network. And, this year even more Golden Tickets will be up for grabs thanks to Food Sport sponsors who will be featured in a series of stand-alone contests.

Though many of the rules for Taste of America will remain the same, competitors can expect some changes. (Click here for an official overview of the Series’ rules). Most notably, the recipe submission duration for each sponsored contest will be shortened. This year, competitors will only have seven days from when a sponsored contest opens to submit their recipes and photos. The good news is that competitors will have multiple opportunities to enter different Taste of America contests throughout the year leading up to the Main Event in Dallas. A new contest will be announced every other Friday, with Facebook Live results being announced on alternate Mondays.

The number of Golden Tickets awarded will vary per contest. Winners will be allowed to choose the category in which they wish to compete at WFC’s 10th Anniversary event in Dallas, Texas (assuming that category is still open). And for those competitors who want to win even more, there will be options to post dish photos on Instagram for additional prizes.

Other sponsored contests in the Taste of America Spring Series will follow shortly thereafter.

As in previous years, recipe submissions will be scored using WFC’s E.A.T.™ Methodology by a panel of hand-picked, veteran judges. While judges will not be tasting the entry dishes, they will be able to score a dish on perceived taste after studying the recipe and submitted description. WFC recommends describing prominent flavors and accents in the recipe description to help with establishing perceived taste scores.