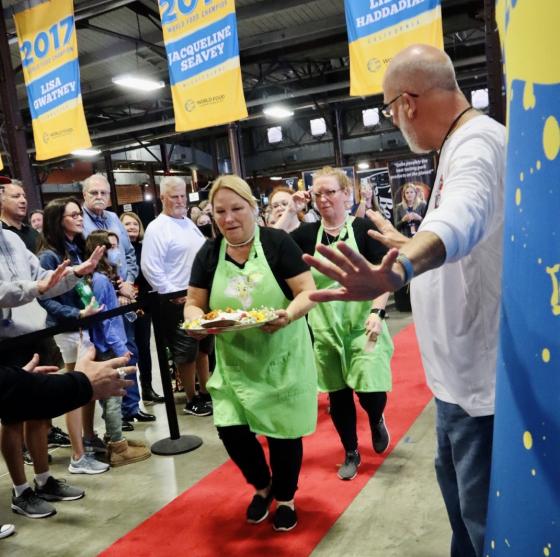 Organizers of the World Food Championships (WFC) announced today that a new slate of rules and processes will be introduced in 2022 for a significant expansion in Food Sport. Some of the changes will be major, like adding and retiring categories, while others will involve streamlining processes to make the competition more efficient and prominent for competitors.

“We’re preparing to take Food Sport mainstream and make it a household name in 2022 and beyond,” commented Mike McCloud, President / CEO of WFC. “As our content partners and food-related sponsors look to strengthen and elevate the WFC platform, we are excited to announce some big changes that are designed to improve notoriety of our event, as well as for home cooks, pro teams and chefs around the globe.”

The new categories that will be added in 2022 include Vegetarian and Rice/Noodles, giving WFC the ability to expand into other major regions of iconic tastes throughout the world. Those will replace the current Recipe and Chef categories, bringing WFC’s focus to the following ten championships: Barbecue, Bacon, Burger, Dessert, Rice/Noodles, Sandwich, Seafood, Soup, Steak and Vegetarian.

The new slate of competitions will be featured in a 10th Anniversary celebration that will be held once again at Fair Park in Dallas, Texas, from Nov 7 - 12, 2022. Returning to the iconic park with a full week of Food Sport activities will enable WFC to expand its footprint and programs to celebrate Food Sport like never before.

“As we head into our 10th Anniversary, the opportunity for us to make some strategic changes has never been more timely. Our venue operator, our host city, our content and distribution partners have never been stronger. So the time has come to really focus on the future of WFC. Making the event better and more mainstream focused is critical for long-term growth, which in turn will bring more opportunity and notoriety to our sport and its champions,” McCloud said.

Part of that strategy will involve a two-hour cook time in the Opening Round that only requires a Signature dish from competitors. No longer will a “structured” dish be required, making it possible for cooks to focus 100 percent of their energy on their most dynamic and creative dish possible for the event’s E.A.T.™-certified judges.

There will continue to be sponsored products used in the Opening Round. However, the limitation of making a specific required dish will be removed, making it possible to see a bigger variety of dishes in each of the ten categories.

Another major change that WFC will implement is how the Top 10 finalists are determined. Based on the success of the new X-Factor, which was introduced in 2021, WFC will now take the top five scoring dishes from the Opening Rounds into the finals, as well as the top five contestants who demonstrate a unique X-Factor in their recipe and/or overall cooking performance. Those 10 teams will then be required to join WFC’s new “Best of the Fest” consumer programming, which will feature bonus bucks opportunities determined in a People’s Choice process.

“This is absolutely a game changer, not only for WFC, but for all of the participating cooks,” McCloud stated. “We will be releasing more info and official rules on this by Spring 2022. But for now, cooks need to be focused on choosing their categories, securing their spot for the most ambitious and exciting WFC ever, and then developing the best signature dish they can dream up — and ultimately execute. Because the stakes have never been higher.”

Securing a competition spot will actually be harder — or easier, depending on how a team has performed in the past. The tough part: WFC is limiting all of its categories to a total of 30 team spots in 2022. The good part: WFC is changing the eligibility process. As a 10th Anniversary special, the registration process will be open and eligible to ANY TEAM that has finished in a Top 10 spot throughout WFC’s history. Going back to 2012, that means more than 600 teams will have an automatic qualification to register and take advantage of the Early Bird registration period that occurs in January.

“This obviously changes everything,” McCloud noted. “Limiting the field will make it harder to get into WFC. So our regional and state partners will now have a much more valuable gateway process that teams should be looking into. And of course, for those teams who have been fortunate enough to finish in a Top 10 before, it’s imperative to get registered as soon as possible because we will definitely fill up faster than ever in 2022.”

McCloud added that teams will be excited to experience the event’s first-ever “Food Sport Week” in Dallas, where special tastings, pairings, demos and events will be offered to competitors and consumers alike. For example, the new programming will include a “Best of the Fest” event  that will utilize Top 10 finishers in a public-facing strategy. But there will also be a Food Sport seminar series offered exclusively to competitors, judges and event directors, to help champions in the industry to get ready for more national awareness, media training, and sponsor opportunities.

Lastly, teams should be aware that registration fees are going up in 2022. This is the first increase in team fees since 2015. To help offset the increase, WFC will be offering a $100 discount to qualified teams during the Early Bird Registration period. That period will run from January 3rd to January 21st, and a list of key registration / event changes is available here. Up to 25 of the 30 team spots in each category will be available during this Early Bird period. The remaining 5 team spots will be reserved for later in the season as qualifier programs and partners conduct their events.

“There is MUCH more news to share as we get into 2022,” McCloud promised. “Our 10th Anniversary is going to be special in so many ways that it’s hard to explain right now. But suffice it to say, that I have never been more excited about our future and what the WFC platform will be able to do for Food Champions going forward. For anyone who’s been on the sidelines for awhile, this is definitely the year to get back in on the action!”