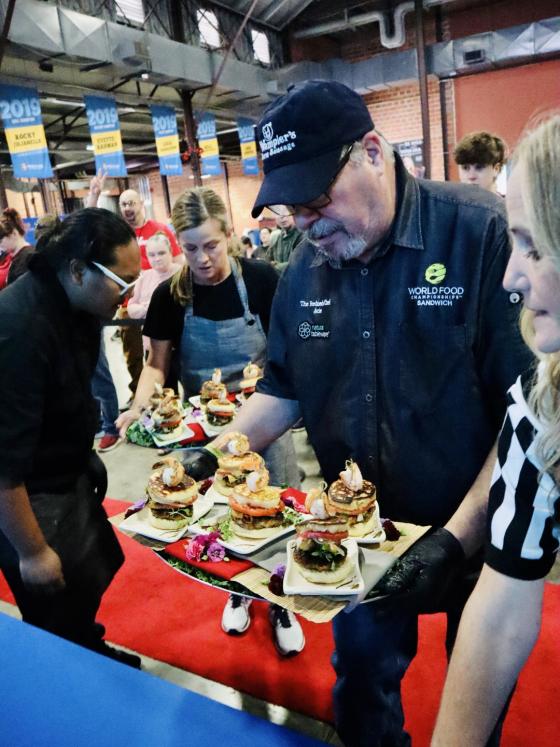 In Food Sport, a competitor winning a category title more than once is a rare occurrence. In fact, only a few cooks in the competition’s nine-year history have been able to accomplish a repeat.

“This year’s Sandwich Category was one of the most stacked in terms of returning champions competing,” commented Mike McCloud, President and CEO of WFC. “In the field was two-time Sandwich Champion Kelli Fairchild-Cochran (2014, 2019), 2019 World Burger Champion Morgan Cheek, 2017 World Chef Champion Craig Baker and several other award-winning chefs.”

The North Carolina Chef tackled a series of challenges at WFC 2021. During these challenges, he was tasked with creating a French Dip, impressing the judges with his signature dish and incorporating the Sandwich category sponsor, Wampler’s Farm Sausage, in his third and final dish.

For the Structured Dish Challenge, sandwich competitors were tasked with creating their very own version of a “French Dip.” Competitors were encouraged to be creative and put their own spin on what a “French Dip” meant to them. The guidelines, as defined by WFC organizers, were “a hot sandwich made with your choice of protein, meat blend, meat substitute, or vegetable substitution, on a roll or choice of bread.” Vincent served up a “Korean Style French Dip” that he stated “will have your taste buds dancing as this French Dip version features Korean spice and funky fun flavors.”

WFC’s Signature Dish Challenge gives competitors the opportunity to showcase their talents. With 90 minutes on the clock, they have free rein to craft any sandwich recipe. Vincent entered his “Mushroom and Asparagus Sand-o-wich,” which is his version of a grilled cheese with portabella mushrooms, asparagus and melted gouda cheese.

Coming out of the Opening Rounds,  (Structured Dish & Signature Dish), Vincent placed 9th, barely earning him a spot in the Final Round.

In the Final Round, Vincent’s goal was to best the other nine competitors who advanced to WFC’s Top Ten “Infusion” Challenge. In this third and final round, each competitor was tasked with creating any sandwich they wished to make. The challenge, however, required them to incorporate Wampler’s Farm Sausage. Vincent created a Japanese Style Shumai Sandwich, which he stated “reinvents all the flavors we all love in Japanese style Shumai and then some!”

The sandwich featured Wampler’s Farm Omega-3 Sausage with shrimp and other Asian ingredients, Japanese style aioli and was topped with roasted onion, sliced heirloom tomatoes, and a crispy chicharron with Asian umami nestled in a made-from-scratch English muffin.

Vicent’s Infused Sandwich, not only moved him up to the 1st place position, but also earned him $7,500 and a seat at WFC’s $100,0000 Final Table Challenge where he will go up against the other nine category champions at WFC’s Final Table event in South Carolina’s Lake Murray Country set for April 28 - May 1, 2022.

But for now, he is enjoying his success as he awaits his task for the $100,000 grand prize.