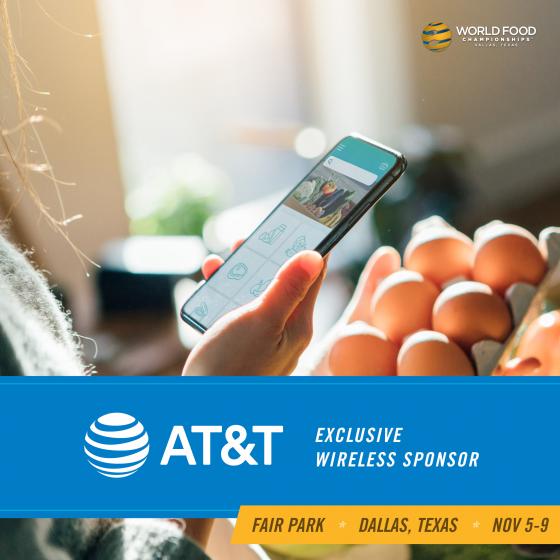 The World Food Championships (WFC) has partnered with the nation’s largest wireless network to make sure foodies from around the nation will be able to stay connected to all of the culinary action at this year’s largest Food Sport event.

WFC announced today its alignment with AT&T as the exclusive wireless sponsor of the 2021 event, which will feature more than 1,200 cooks and chefs from more than 40 states.

The championships, which will take place November 5-9 at Fair Park, will feature about 400 teams who are trying to win their share of $300,000 in ten categories that include BBQ, Bacon, Burger, Chef, Dessert, Recipe, Sandwich, Seafood, Steak and Soup.

WFC also features over 20 special tasting events for consumers as part of its Flavor Fest, with fan-favorites BBQ Ranch and Bourb’N’Que making a return from the event’s Dallas debut in 2019. New attractions include Champion’s Tables, Brunch Bar, and a Hall of Taste where attendees will have the opportunity to taste two dozen samples as they enter WFC’s Kitchen Arena.

Secure internet connection will be a must for the thousands of attendees, competitors, media personnel, influencers and sponsors as they record all the incredible action and food entries, which will include over 8,000 custom dishes.

“Everything is bigger in Texas, and thanks to AT&T, our wifi coverage of this incredible Food Fest will be no exception,” said Mike McCloud, President and CEO of WFC. “From livestreams to social media posts and remote scoring reports, a reliable internet connection is essential to our operations, and that’s why we are thrilled to partner with AT&T to make sure we are as strong as possible in that area.”

This will not be the first time this year that AT&T brings their top of the line technology to Fair Park. The company’s reliable network was also used at Texas’ largest event – The State Fair of Texas– which just wrapped up on October 17.

“AT&T is connecting attendees like never before. We made enhancements to our network and added wifi to high-traffic areas so that every selfie, every video, every social moment can get captured and uploaded quickly,” said Lynette Aguilar, Vice President/ General Manager, AT&T North Texas.