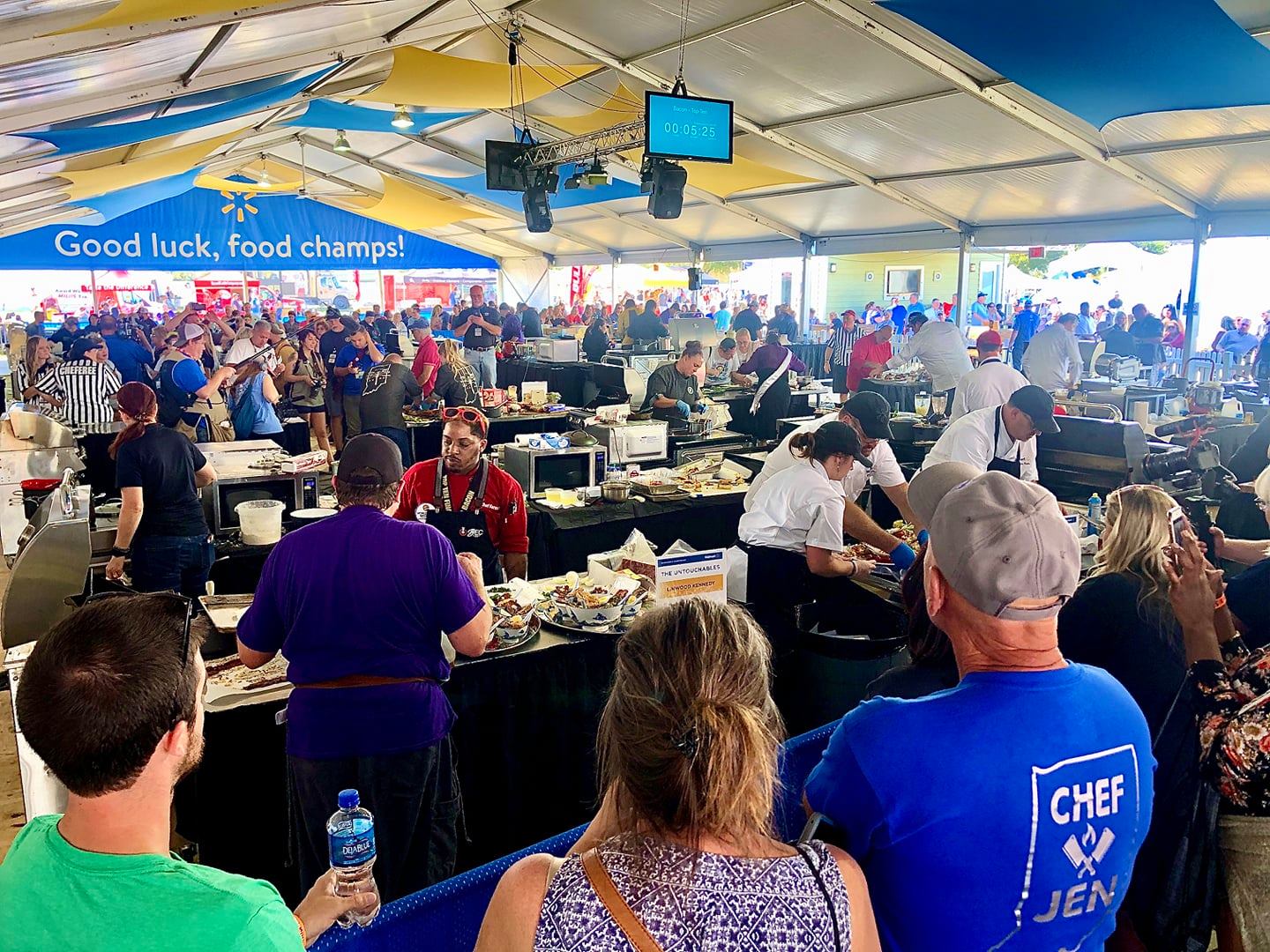 The most anticipated event in the food sport industry is saddling back up for a BIG comeback this November at its new location of Fair Park in Dallas, Texas. Tickets to the World Food Championships (WFC) are officially on sale, and event organizers just released an official cheat sheet to help foodies map out their weekend.

“As Texas and the world open back up, it’s exciting to know that we’ll be able to put our additional planning and strategies in play for the most robust and fun-filled food fest we’ve ever produced,” commented Mike McCloud, President and CEO of WFC.

WFC’s five-day throwdown and Flavor Fest will present a series of foodie attractions for attendees while also hosting more than 1,200 cooks — from celebrity chefs to pro teams to home cooks — in a major “food fight” that rewards the winners with a $300,000 prize purse.

Biscuits & Jampionship –– WFC has once again partnered with the Dallas-based jam and jelly company, The Jelly Queens, to bring back the “Biscuits and Jampionships” ancillary chef competition. Determined through an online recipe contest months prior, ten finalists will recreate their recipe submissions in person at WFC for an esteemed panel of judges. This delicious and quirky contest is always full of fun surprises, thanks to the lovable Jelly Queen herself, Donna Collins. All sweet tooths should standby for leftovers!

Bourb’N’Que –– What do you get when you mix premium bourbon tastings with delicious ribs prepared by the best pitmasters in America? The best barbecue block party - and People’s Choice voting contest - Dallas has ever seen (or tasted)! If you’re a foodie who loves barbecue and bourbon, then this is a WFC must-attend event!

Celebrity Sightings –– WFC will be hosting more than 75 TV Chefs, who will be playing key roles in either the competition or judging process. From Marcel Vigneron to Jay Ducote to Kent Rathbun to Katie Dixon, you’re bound to see a celebrity chef walking around chowing down on the amazing flavors WFC has to offer!

Fire Woman –– Sixty minutes. Four award-winning female pitmasters. One challenge. Zero help. Need we say more? Join us to see who will rise from the smoke to take home the Fire Woman title and cash prize.

Granny Grilling – A unique culinary competition featuring four fiery grannies who will not be whipping up your stereotypical granny cooking. Instead, they will be sharpening their knives for the 3rd Annual Granny Grilling Challenge, where they will go head-to-head in a “mystery box” themed competition. With no prior knowledge of what products they will have access to, the grannies will have to follow their culinary instincts and — if history is an indicator — even some of their yoga skills!

Hassell Cattle One Bite Challenge –– ”Meat” you in WFC’s #BBQRanch Zone for this new steak showdown! Hassell Cattle Company and Premier Grilling have partnered to host random duals throughout the WFC weekend pairing friends and rivals to a steak-off. The chefs and pitmasters will go head to head grilling up wagyu steaks, and the judges will be pulled from random crowds in BBQ Ranch!

LIVE-Action Cooking Competition –– The “meat” of the event will be front and center … Kitchen Arena! In Fair Park’s Centennial Hall, 1,500 competing chefs will be battling in 10 different food categories on 40 kitchen stations during a span of five-days. Trust us, once you see a chef running to the turn-in-table with a silver platter filled with the most elaborate food dishes with only 5 seconds remaining on the clock … you’ll catch the #FoodSport adrenaline rush and will never want to leave!

The World Food Championships (WFC) is the highest stakes food competition in the world. This multi-day, live event culinary competition showcases some of the world's best cooks who compete for food, fame and fortune in 10 categories (Bacon, Barbecue, Burger, Chef, Dessert, Recipe, Sandwich, Seafood, Soup and Steak). In 2019, more than 450 culinary teams from 11 countries and 42 American states competed in WFC’s Main Event. In August, the 10 Category Champs went head-to-head for a $100,000 bonus that determined a new World Food Champion in a TV special called The Final Table: Indianapolis. While contestants have to earn their way into WFC by winning a Golden Ticket at a previous competition, potential judges are welcome to take WFC’s online certification course that explains the E.A.T. methodology. Certified judges then request and receive available seats at the next scheduled WFC event. Click here to learn more about getting certified.
« Back to News
Search All News SEARCH