Team Indiana is Revving Up for World Food Championships 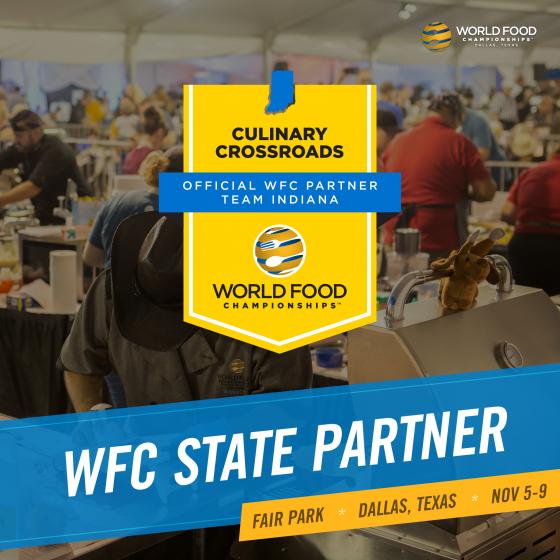 Another state partner just announced that it’s gearing up to defend its previous culinary awards at the 9th Annual World Food Championships (WFC) in November. Team Indiana, which also hosted the WFC Final Table in 2020, has now selected its seven decorated competitors who will be heading to Dallas to compete in six categories to claim as much of the $350,000 prize purse as possible.

Team Indiana is made up of home cooks, chefs and professional competitors who are all experienced Food Sport champions. They are all part of the Culinary Crossroads initiative, which focuses on raising awareness of the people, product, places and services which define Indiana’s culinary landscape.

“We are thrilled to have Team Indiana back in the Ultimate Food Fight for 2021,” said Mike McCloud, President and CEO of WFC. “Culinary Crossroads has been a super partner of WFC, and their passion for Food Sport is unmistakable. They did a beautiful job of hosting our last Final Table, and we can’t wait to see what new culinary ideas they’ll be bringing to Dallas as we set the new table for another epic battle.”

Four Team Indiana members placed in the Top 10 in their respective categories in 2019, the last time WFC was held before getting cancelled in 2020 due to Covid. Returning to compete this fall in Dallas will be:

“Each and every one of our Team Indiana members are thrilled to be returning to the World Food Championships, which is truly the gold standard for food sport competition,” said Larry Dickerson, Director of Culinary Crossroads. “The combination of competition and camaraderie makes it a very special experience for the competitors, sponsors and attendees.”

To watch Team Indiana compete in person this November, ticketing options for the Ultimate Food Fest start at just $15 are available, here.