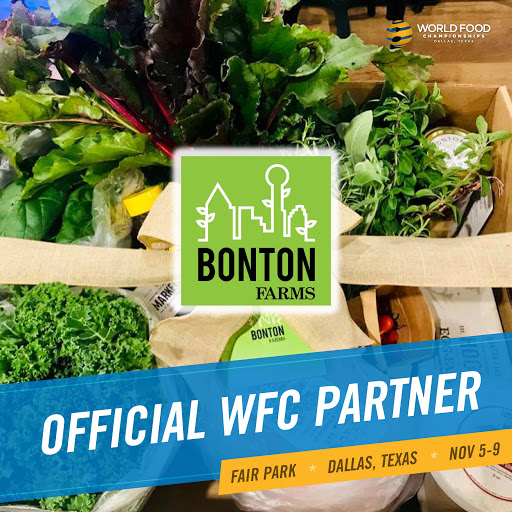 The World Food Championships (WFC) is back this November for its 9th Annual tournament of food and fun, only this time it’s featuring a new partnership with Bonton Farms– an urban farm located in Southeast Dallas.

Bonton will be providing fresh produce in many aspects for WFC and its 1500+ visiting cooks and chefs. But prior to that, the new partnership will feature a special series of dinners that combine the talents of past award-winning chefs and the produce from Bonton’s farm.

Each month, from June to October, Bonton Farms will host a Farm-to-Table dinner featuring one of WFC’s “Champion” Chefs. For the first time, Dallas foodies will have the chance to see and taste what makes the Ultimate Food Fight so special with a custom menu with wine pairings in a dining experience overlooking the farm, accompanied by live entertainment and an open bar.

Virginia chef Mark Conway has been confirmed for the first dinner on June 26, 2021. Tickets for this date are available here. All proceeds go to Bonton Farms initiatives. Doors will open at 6 p.m. CDT and dinner will begin at 7 p.m. CDT.

Starting out as a small garden, Bonton Farms has grown into two fully functioning farms, a café, a farmer’s market and a coffee shop. It’s focused not just on planting seeds in the ground but also in the community by working with and supporting neighbors to promote a happier and healthier tomorrow.

“After learning about what all Bonton Farms brings to the table for the community in Dallas, we were thrilled to get involved with them on a number of levels,” said Mike McCloud, President and CEO of WFC. “The focus of a strong, healthy community through local food is something that our food family has pushed and supported for years, and through this partnership we can bolster that initiative.”

For those in the Dallas area who are interested in becoming a certified food judge for official WFC events, Bonton Farms will also host an E.A.T.™ certification course on August 7 from 3-7 p.m. CDT where the Jelly Queen herself, Donna Collins, will be the instructor. Collins has won more than 25 gourmet food awards and has appeared on MasterChef with Gordon Ramsey.

In addition to the farm to table dinners and the E.A.T.™ certification class, Bonton Farms will create a Fresh Pantry at the Ultimate Food Fest where competitors can purchase fresh, locally-grown produce, and then will host a special small-plate, champion-curated dinner at WFC for an exclusive group of VIP ticket holders.