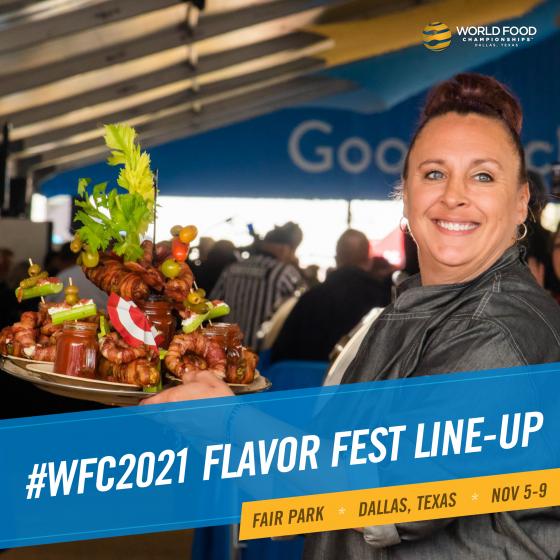 After a year’s delay due to the pandemic, the most anticipated event in the food sport industry is saddling back up for a BIG comeback in Dallas, Texas. The World Food Championships (WFC) just officially announced its 9th Annual Main Event’s Flavor Fest programming, which is set for Nov. 5-9 at Fair Park.

“As Texas and the world open back up, it’s exciting to know that we’ll be able to put our additional planning and strategies in play for the most robust and fun-filled food fest we’ve ever produced,” commented Mike McCloud, President and CEO of WFC. “Plus, even though we’re still five months out from the actual dates, we have already seen an enormous amount of momentum on the competition side with more than 40 states represented in our team count and almost all of our judging positions already filled.”

WFC’s five-day throwdown and Flavor Fest will feature over 20 tasting experiences for attendees while also hosting more than 1,500 cooks — from celebrity chefs to pro teams to home cooks — in a major “food fight” that rewards the winners with a $300,000 prize purse.

Biscuits & Jampionships –– WFC has once again partnered with the Dallas-based jam and jelly company, The Jelly Queens, to bring back the “Biscuits and Jampionships” ancillary chef competition. Determined through an online recipe contest months prior, ten finalists will recreate their recipe submissions in person at WFC for an esteemed panel of judges. This delicious and quirky contest is always full of fun surprises, thanks to the lovable Jelly Queen herself, Donna Collins. All sweet tooths should standby for leftovers!

Bourb’N’Que –– What do you get when you mix premium bourbon tastings with delicious ribs prepared by the best pitmasters in America? The best barbecue block party - and People’s Choice voting - Dallas has ever seen (or tasted)! If you’re a foodie who loves barbecue and bourbon, then this is a WFC must-attend event!

Champion's Table –– Feast on exclusive tastings from WFC’s previous champions as your sweet and savory guide. This is your chance to taste $100,000 worth of award-winning dishes that will be perfectly paired with cocktails to enhance your experience. This luxury tasting event will take place next to the heat of WFC’s live-action culinary competition in Kitchen Arena and available only to VIP patrons.

Fire Woman –– Ninety minutes. Four award-winning female pitmasters. One challenge. Zero help. Need we say more? Join us to see who will rise from the smoke to take home the Fire Woman title and cash prize.