WFC Heats Up With Brunch Bar And Seafood Sponsor 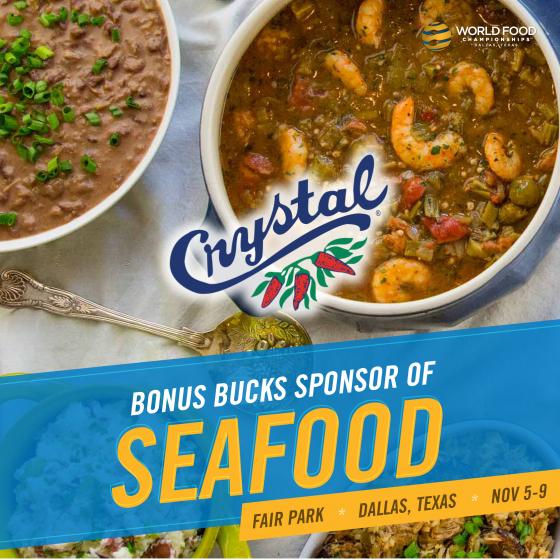 Grills won’t be the only thing bringing the heat to the world’s largest food sport event this November, thanks to the World Food Championships’ (WFC) newest partnership with Crystal Hot Sauce.  As an official sponsor of the food fest, they will be spicing up the event in two major ways –– through WFC’s Brunch Bar and its seafood division of the competition.

“We are really looking forward to having Crystal Hot Sauce join the Food Sport Family,” said Mike McCloud, President and CEO of WFC. “Their quality products are found in about 30 countries around the world from New Orleans to Dubai, so it only makes sense that we would put them in a featured position at WFC.”

At the Main Event, Crystal will provide its Original flavor hot sauce, fondly referred to as the OG,  to all forty stations in WFC’s Kitchen Arena during the Seafood category. Although the infusion of this hot sauce is not a requirement, Seafood competitors will have the opportunity to win extra cash (Bonus Bucks) if they do so. As a Bonus Bucks partner, WFC will award $500 to the highest scoring Seafood Structured Build dish that utilizes the brand. Information on WFC’s Bonus Bucks program will be released July 1st with the event’s Tournament Chart.

Additionally, the three-generation, family-owned-and-operated business will be featured in one of WFC’s newest and most anticipated ticketed events –– the Brunch Bar. Attendees will have the opportunity to try out Crystal’s whole-pepper hot sauce products through WFC’s Build Your Own Bloody Mary Bar, which is set to take place at Fair Park in Dallas, Nov. 6-7.

Ticketing options for the foodie event will be released by July 1st. To sign up for early ticket release and WFC insider perks, click here.