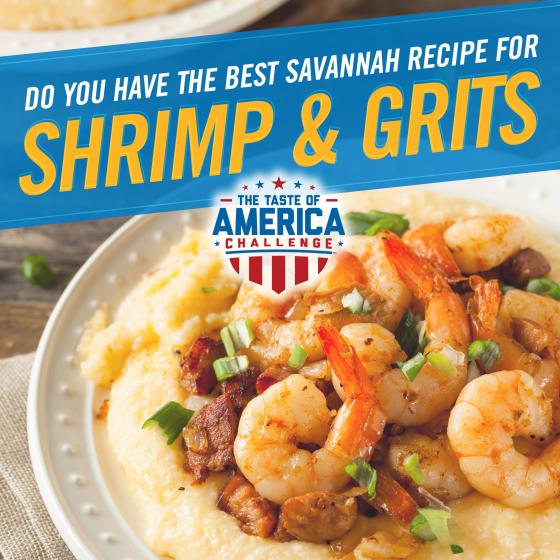 The leader in the Food Sport industry, World Food Championships (WFC), hosts an annual online contest, where chefs and home cooks across the nation submit their best recipes. This year, WFC –– often referred to as the “Ultimate Food Fight” –– is on the search for Savannah, Georgia’s best shrimp and grits recipe. The most impressive recipe will qualify the Savannah cook to compete at WFC’s 9th annual culinary throwdown in Dallas, where they will have the opportunity to win a piece of the event’s $350,000 prize purse.

Why shrimp and grits? Because it’s a staple on any Southern table, and is a hot dish that Savannah locals are best known. So, whether you’re a chef or home cook, WFC is challenging Savannah, Georgia natives to enter into its nationwide online qualifier.

The qualifier is called the Taste of America Challenge (TOA), and takes place in the comfort of your own home or restaurant. The best part? You can submit more than one recipe through the official contest link, here. The top thirty performing recipes will be qualified and invited to compete at WFC, which is scheduled for November 5-9 in Dallas, TX.

Dishes will be scored using WFC’s E.A.T.™ Methodology by a panel of hand-picked, veteran judges. While judges will not be tasting the entry dishes, they will be able to score a dish on perceived taste after studying the recipe and description. WFC recommends describing prominent flavors and accents in the recipe description to help with establishing perceived taste scores.

WFC will accept TOA recipe submissions until March 31st through the contest link at https://bit.ly/3aUl7yp. Click here to review the online qualifier’s rules and regulations and which categories are open for aspiring contestants.


The World Food Championships (WFC) is the highest stakes food competition in the world. This multi-day, live event culinary competition showcases some of the world's best cooks who compete for food, fame and fortune in 10 categories (Bacon, Barbecue, Burger, Chef, Dessert, Recipe, Sandwich, Seafood, Soup and Steak). In 2019, more than 450 culinary teams from 11 countries and 42 American states competed in WFC’s Main Event. In August, the 10 Category Champs went head-to-head for a $100,000 bonus that determined a new World Food Champion in a TV special called The Final Table: Indianapolis. While contestants have to earn their way into WFC by winning a Golden Ticket at a previous competition, potential judges are welcome to take WFC’s online certification course that explains the E.A.T. methodology. Certified judges then request and receive available seats at the next scheduled WFC event. Click here to learn more about getting certified.