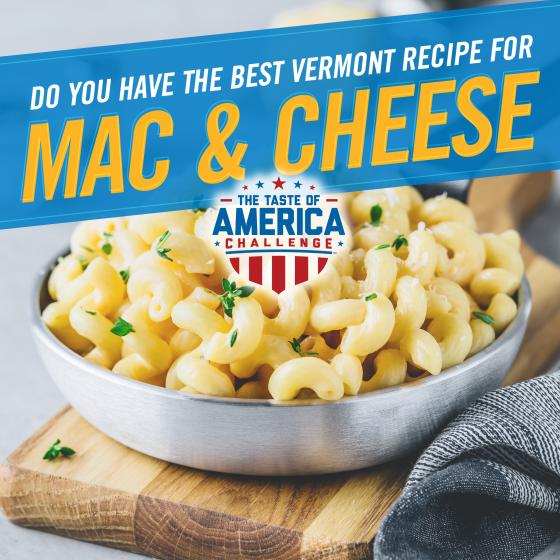 The leader in the Food Sport industry, World Food Championships (WFC), hosts an annual online contest, where chefs and home cooks across the nation submit their best recipes. This year, WFC –– often referred to as the “Ultimate Food Fight” –– is on the search for Vermont’s best mac & cheese recipe. The most impressive ooey, gooey mac & cheese recipe will qualify the Vermont cook to compete at WFC’s 9th annual culinary throwdown in Dallas, where they will have the opportunity to win a piece of the event’s $350,000 prize purse.

Why mac & cheese? Because Vermont is known for its gourmet cheese farms and mac & cheese is one of Vermont’s most classic dishes. So, whether you’re a chef or home cook, WFC is challenging Vermont natives to enter into its nationwide online qualifier.

The qualifier is called the Taste of America Challenge (TOA), and takes place in the comfort of your own home or restaurant. The best part? You can submit more than one recipe through the official contest link, here. The top thirty performing recipes will be qualified and invited to compete at WFC, which is scheduled for November 5-9 in Dallas, TX.

Dishes will be scored using WFC’s E.A.T.™ Methodologyby a panel of hand-picked, veteran judges. While judges will not be tasting the entry dishes, they will be able to score a dish on perceived taste after studying the recipe and description. WFC recommends describing prominent flavors and accents in the recipe description to help with establishing perceived taste scores.

WFC will accept TOA recipe submissions until March 31st through the contest link at https://bit.ly/3aUl7yp. Click hereto review the online qualifier’s rules and regulations and which categories are open for aspiring contestants.