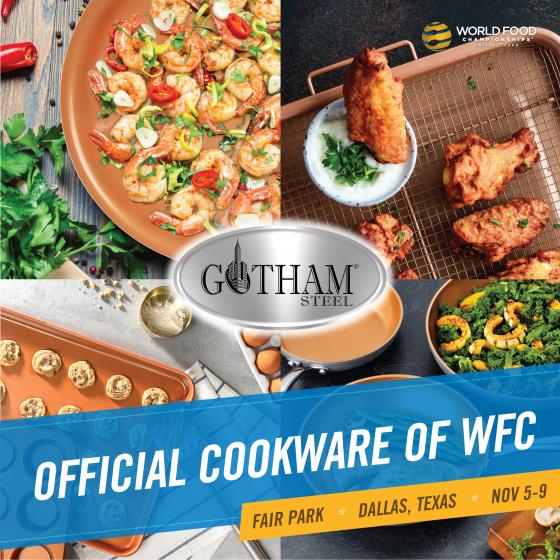 With a $350,000 prize purse up for grabs, having the right tools at your fingertips is a key ingredient for Food Champs when it comes to competing at the world’s largest Food Sport event, the World Food Championships (WFC). That’s why organizers at WFC are proud to announce that all cook stations at #WFC2021 will be equipped with the newest technology in non-stick cookware, thanks to returning sponsor Gotham™ Steel.

As WFC’s Official Cookware, the “made-to-cook-easy” company will be providing a complete set of its copper pots and pans for each team this year: a 7-quart pot, 5-quart pot, 3-quart pot and 12.5” pan, all with custom lids.

“Gotham’s incredible products are a critical part to our concept of delivering a high-quality, level-playing field for cooks and chefs at WFC,” said Mike McCloud, President and CEO of WFC. “Having the Levy family and their passion involved in Food Sport is also a huge benefit for this industry, and we truly appreciate their commitment to WFC.”

During its four consecutive years of serving as a WFC sponsor, Gotham™ Steel has created a loyal following from Food Sport teams. Its non-stick products will not only be easily available for competitors but also to attendees as Gotham™ Steel will feature educational cooking demonstrations throughout the week of the Ultimate Food Fight in Dallas, scheduled for November 5-9.

In addition to fully stocking Kitchen Arena with their premium pots and pans, Gotham™ Steel will be awarding a new gift set of its products to each of the ten WFC category champions.

Stay tuned for more partnership announcements for the upcoming WFC 2021 Main Event, which is set to be held inside for the first time at Fair Park in Dallas. Ticketing options for the foodie event will be released by July 1st. If you’d like to be one of the first to be notified when tickets go on sale, click here.