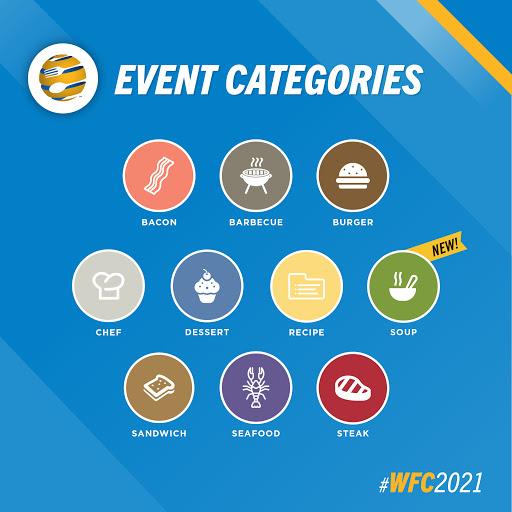 The leader in Food Sport, the World Food Championships (WFC), announced today that the official 2021 competition categories for its 9th Annual Food Fight will remain the same as planned for #WFC2020.

As a reminder, WFC will be dropping the Chili category and replacing it with a World Soup Championship this season. According to WFC officials who voted for this change, the primary objective is to allow for more creativity and innovation when it comes to liquid-based recipes.

"Part of our perpetual mission is to be unique and compelling," commented Mike McCloud, President and CEO of WFC. "That means that we are constantly monitoring and sometimes implementing new trends that are occurring in the food space. Soup is one of those areas of interest right now, from non-GMO to ramen to bisque recipes. So for growth and innovation purposes, we believe switching from traditional chili to a more flexible soup category makes a lot of sense for WFC.”

McCloud pointed out that WFC is now partnered with the International Chili Society, which already conducts an annual world championship for chili cooks each year. That is scheduled to occur in Myrtle Beach, South Carolina this coming April.

In addition to Soup, the remaining nine championships at WFC will include Bacon, Barbecue, Burger, Chef, Dessert, Recipe, Sandwich, Seafood and Steak. Structured Builds, Infusions and special challenges for all categories will be announced on or before July 1, 2021.

Due to the 2020 cancellation, only six categories remain open for registration into the 2021 Main Event– Bacon, Barbecue, Chef, Dessert, Recipe, Soup and Steak. Unlike typical years, WFC’s rollover of qualifications from the cancelled event has led to the categories filling up quicker than usual, so competitors should be prompt in reserving their spot.

“More than anything, after this crazy year, we just can’t wait to get back into the swing of things,” said McCloud. “And with four categories already closed, we are on track for a record year of registered competition teams.”

The World Food Championships (WFC) is the highest stakes food competition in the world. This multi-day, live event culinary competition showcases some of the world's best cooks who compete for food, fame and fortune in 10 categories (Bacon, Barbecue, Burger, Chef, Dessert, Recipe, Sandwich, Seafood, Soup and Steak). In 2019, more than 450 culinary teams from 11 countries and 42 American states competed in WFC’s Main Event. In August, the 10 Category Champs faced-off in the $100,000 challenge that determined a new World Food Champion at The Final Table: Indianapolis.
« Back to News
Search All News SEARCH