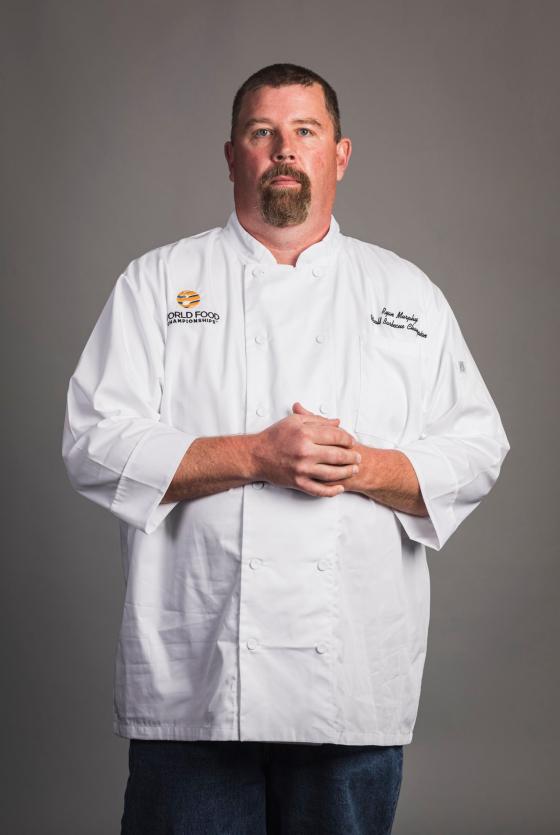 World Barbecue Champion Ryan Murphy is returning home as the “bubble team” after competing in the finale of the world’s largest Food Sport event. The “Final Table: Indy” culinary throwdown was held in Indianapolis in August and filmed for a special one-hour TV show that will be released in October on the Cooking Channel.

The event was hosted by the World Food Championships (WFC), Visit Indy, Ivy Tech Culinary Center and Culinary Crossroads. It featured ten Category Champions who had earned a seat during WFC’s Main Event last fall in Dallas. Murphy completed the tournament with a 6th place finish.

In the “Final Table: Indy” first round, Murphy and the other champions were tasked with making a Pork and Parisian Gnocchi dish using Red Gold Tomatoes and pork cuts sourced from the National Pork Board.

Murphy, his wife Karen and sous chef Brad Leighninger finished the Challenge One cook on time and presented it to a panel of local pork experts Chef James Murray from the National Pork Board. The judge panel used WFC’s propriety judging system, the E.A.T.™ Methodology (which stands for Execution, Appearance and Taste) to score each dish.

The dish was titled “Pork Schnitzel with Parisian Gnocchi in a Red Gold Tomato Mushroom Ragu” and missed the next round’s cut-off by only a quarter of a point. The dish scored a 92.125 (out of 100) after the panel of judges’ scores were combined and formulated on key weightings. Although he did not advance to the next round, Murphy’s sixth place finish won him an additional $1,250 on top of his $10,000 category win at WFC’s 2019 Main Event.

Only five of the Category Champions continued on to Challenge Two, which involved creating a delicate duck dish designed by Chef Greg Hardesty and using Maple Leaf Farms product. From there, three finalists were awarded a spot in the last challenge, which involved a creative interpretation of the iconic Indiana Sugar Cream Pie.