Burger Competitors Will Face Off In Inaugural Impossible Foods Challenge 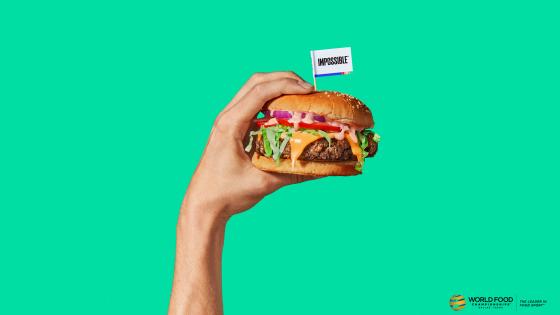 The 9th Annual World Food Championships (WFC) will present burger competitors with a challenge unlike any before, thanks to recent addition of the category’s official sponsor, Impossible Foods. WFC competitors will engage in a culinary face-off featuring the award-winning, plant-based Impossible™ Burger at the center of the plate.

For the first time in WFC history, all burgers in the Structured Build and Top Ten rounds of the burger championship will require plant-based patties.

During the Opening Round, the Structured Build will be an “Impossible Southwest Chili Cheeseburger,” in which all 40 teams will be required to use Impossible Foods’ plant-based meat to create burger patties paired with chili. An example of a Southwest Chili Cheeseburger might be topped with a plant-based cheese, green chili, sweet corn relish, crispy tortilla strips and a potato bun, all of which achieve the goal of a completely plant-based build.

In the Top Ten Round, Boulevard Beer will be required as an Infusion, with Impossible Foods’ plant-based meat serving as the burger base. For Food Champs looking to experiment and practice with this meat made from plants at home, Impossible Foods’ convenient and versatile 12-ounce retail product recently hit over 2,000 Walmart stores nationwide.

WFC 2020 Burger Competitors will receive detailed tournament information in their competitor packets, which is set to be released Sept. 1st.

“We know that plant-based products are trending in the food space, and that’s why we highlighted plant-based builds in one of our other categories last year,” said Mike McCloud, President and CEO of WFC. “But to have a well-known and expected brand like Impossible Foods in the tournament now, that’s something we truly look forward to seeing how Food Champs will utilize in their burger builds.”

Impossible Foods was founded with the mission to create a more sustainable food system by making delicious and nutritious meat from plants – with a much smaller environmental footprint than meat from animals. The company’s flagship product is the Impossible Burger, which looks, cooks and tastes like ground beef from cows, but is made from plant-derived ingredients.

Key ingredients in the Impossible Burger are soy protein, potato protein, sunflower oil, coconut oil, and heme–which is an iron-containing molecule that is found in all living things, including both plants and animals, and is what makes meat taste and look like meat. Impossible Burger delivers as much protein and bioavailable iron as animal-derived beef, all without the downsides associated with beef.