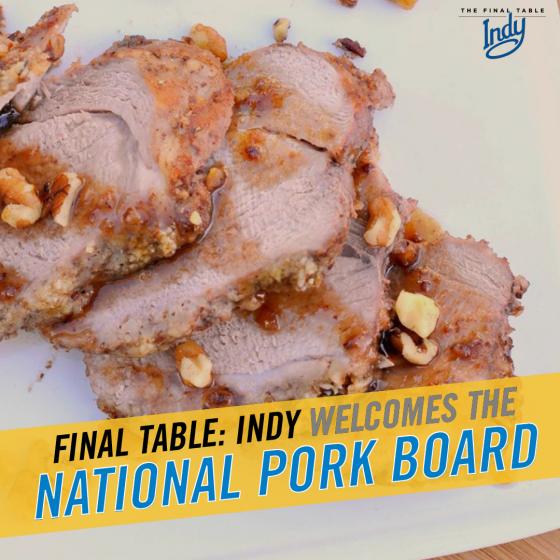 The World Food Championships (WFC) announced today that the National Pork Board will be a featured sponsor at the WFC’s “Final Table: Indy” this August. Each of the 10 finalists from the WFC Main Event in Dallas will first have to master the perfect pork dish if they are to become the next World Food Champion and winner of Food Sport’s $100,000 grand prize.

In the first round, each of the 10 category champions will be challenged with making a pork and Parisian gnocchi dish. Sourced from local Indiana farms, 10 different pork cuts selected by the National Pork Board will be available to use by the champions as they seek to impress a panel of five experts. The panel, which includes a World Certified Executive Chef from the Pork Board, will score each contestant using WFC’s proprietary judging system, the E.A.T.™ Methodology. Following the challenge, five of the 10 champions will be eliminated and the other five will proceed to the second challenge.

“We are honored to have the National Pork Board join us at the Final Table event in Indianapolis,” said Mike McCloud, President and CEO of WFC. “Indiana is one of the leading pork producing states in the country and having the support of the organization for this challenge is very exciting.”

“Pork is a staple protein around the world,” said Angie Krieger, Vice President, Domestic Marketing at the Pork Board. “From Latin America to Asia to Europe, nearly every culture has strong culinary ties to pork. The World Food Championships is the perfect way to showcase how pork can be a passport to authentic world flavors, and how versatile, flavorful and lean this protein can be.”

WFC will keep fans updated on which champs make it to the final round, but the ultimate winner will not be revealed until the newest “Final Table: Indy” show airs on the Cooking Channel this fall.

About the National Pork Board

The National Pork Board has responsibility for Pork Checkoff-funded research, promotion and consumer information projects and for communicating with pork producers and the public. The Pork Checkoff funds national and state programs in consumer education and marketing, retail and foodservice marketing, export market promotion, production improvement, science and technology, swine health, pork safety, and environmental management and sustainability. For the past half century, the U.S. pork industry has delivered on its commitment to sustainable production and has made significant strides in reducing the environmental impact of pig farming. Through a legislative national Pork Checkoff, pork producers invest $0.40 for each $100 value of hogs sold. Importers of pork products contribute a like amount, based on a formula. For information on Checkoff-funded programs, visit www.pork.org.