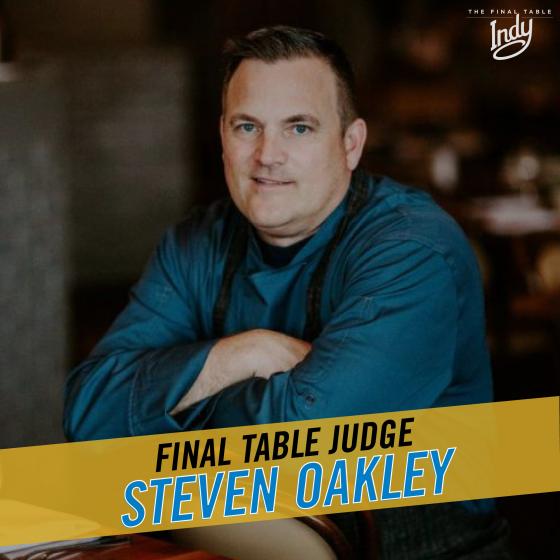 As the pinnacle moment in Food Sport approaches, the World Food Championships (WFC) has revealed another esteemed judge for its “Final Table: Indy” event in Indianapolis this August.

Chef Steven Oakley – a well-known local chef who has owned Oakley’s Bistro since 2002 – will now bring his talents into play in the second challenge of the Final Table, which tasks competitors with recreating an intricate dish using Maple Leaf Farms White-Pekin duck.

Chef Oakley’s career began in Chicago, where he fulfilled his childhood dream of working in great restaurants like Printer’s Row and Charlie Trotter’s. After several years of perfecting his craft in the Windy City, Oakley opted to relocate to the Circle City, where he would spend almost a decade at the Something Different Restaurant. It was here that his career would blossom, as he received many accolades, including nominations for the James Beard Rising Star Chef’s award.

Oakley’s most recent venture, Oakley’s Bistro, has received recognition from Bon Appétit, American Culinary Federation awards, “Restaurant of the Year,” from Indianapolis Monthly, and more. According to its web site, Oakley’s Bistro Kitchen Team has “the joy of matching and pairing diverse qualities and characteristics in creating signature dishes, pleasing to the palate as well as the eye.”

Now, Oakley will join a panel of four other judges in the second round of the 8th Annual WFC Final Table. The ten category Champions will be narrowed down to just five contestants for this round. WFC will keep fans updated on which champs make it to the final round, but the ultimate winner will not be revealed until WFC’s newest Final Table show airs on the Cooking Channel.

The ten champions who will compete at The Final Table: Indy, which will occur at Ivy Tech Community College on Aug 8th and 9th, include: