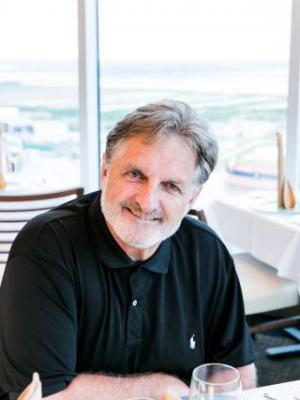 Final Table contestants at the 2016 World Food Championships will definitely have to bring their “A” game this year. Otherwise, their dishes may get sacked by one of the judges affectionately known as a “Killer B.”

Former Alabama great and Miami Dolphin defensive lineman Bob Baumhower will join its celebrity roster of Final Table judges this November. The choice is not a “Hail Mary” call. It’s backed by a robust career in both football and culinary achievement.  In fact, Baumhower has a collection of restaurants to add to his list of athletic accolades. Baumhower is the CEO of Aloha Hospitality International, a culinary lineup of restaurants including Baumhower Restaurants, Bimini Bob’s, Dauphin’s, and La Floridita, a Cuban-themed speakeasy that will open in downtown Mobile later this year.

Baumhower’s football career started in 1974 at Alabama, where he played for legendary coach Paul “Bear” Bryant, who taught him a life-long lesson in success.

Following his career with the Crimson Tide, Baumhower played ten seasons (1977-86) at defensive tackle for the Miami Dolphins under another Hall of Fame coach, Don Shula. During his tenure in Miami, Baumhower was a key member of the famed “Killer B’s” defense that helped propel the team to two Super Bowl appearances during that time. Baumhower notched 39.5 sacks in his career, which is tied for eighth in Dolphins history and is the most ever by a Miami defensive tackle. He led the Dolphins with nine sacks in 1981, and was a five-time Pro Bowl selection. Baumhower was inducted into the Dolphins Honor Roll in 2008 and was named to Miami’s 50th season all-time team last year.

Baumhower took the passion that he showed on the gridiron into the hospitality industry in 1979 when he partnered with Joe Namath and Richard Todd of the Jets to create a Ft. Lauderdale hot spot called “Bachelors III.” After its success, Baumhower returned to his Alma Mater, the University of Alabama, and opened the first counter-service wing restaurant in Alabama - Wings Sports Grille.

Since then, Baumhower has continued to develop and revive restaurants in the Aloha Hospitality International group to use the freshest, highest quality, locally sourced ingredients possible. Bob’s Victory Grille, notable for its fresh, homemade mozzarella and artisan pizzas,  brought the first coal fired pizza ovens to the state of Alabama.

The latest opening for Aloha Hospitality, called Dauphin’s, is a creole and caribbean restaurant offering coastal cuisine in Mobile, Alabama. Each restaurant under the Aloha Hospitality umbrella has a strong dash of Baumhower’s zealous attention to detail and passion for perfection. From the Italian glass chargers on the tables to artwork on the walls, to wait staff uniforms and design of the chairs, Bob’s hand is at work. His vision and dedication earned him critical acclaim and business success among the best casual restaurants in Alabama.