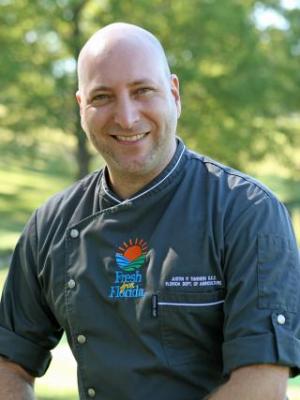 2015 WFC Judge
“I won’t be here to destroy anyone as a judge, I want to uplift folks and encourage them.”

This is the voice of experience.

This is the voice of Chef Justin Timineri (C.E.C.), Florida’s executive chef and Culinary Ambassador, and one of WFC's 2015 final table judges.

Chef Timineri’s background includes being an event chef for NASCAR, PGA and the Kentucky Derby as well as working nationally and internationally for premier hospitality and catering companies. He is a former Champion of the Food Network Challenge Great American Seafood cook‐off in New Orleans, crowned for having the country’s best domestic seafood dish in 2006. His mission is to encourage everyone to rediscover fresh, healthy Florida cuisine, which he does through extensive travel to high profile events around the world in locations such as France, England, Egypt, South Africa, Germany, Belgium, South Korea and China.

Chef Timineri’s role as an international culinary ambassador helps the State of Florida promote its “Fresh From Florida” brand.
Chef Justin is also the resident chef on the award-winning television series “How to do Florida.” Each exciting, fast-paced 30‐minute episode features multiple destinations in the Sunshine State, two unique how‐to features and a Florida cooking segment meant to inspire consumers to take advantage of Florida’s edible bounty.