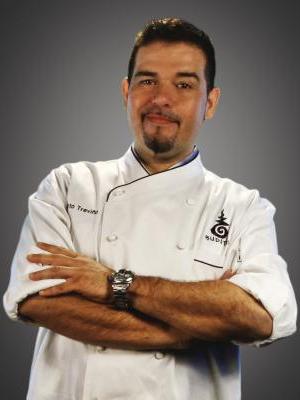 Chef Roberto Treviño became fascinated with the kitchen as a young cook in the San Francisco Bay area, beginning his career as an oyster shucker at a local restaurant at the age of 15.

Chef Treviño has been honored to cook at the James Beard House in New York for their award events, is frequently featured as a guest chef in food events thoughout the US and the Caribbean, including the Aspen Food & Wine Classic, Telluride Culinary Festival and the St Croix Food and Wine Festival, and has served as a guest chef on Celebrity Cruise Lines ships on sever seasons.

He has made numerous television appearances both in Puerto Rico and the US, including a battle against renowned chef Mario Batali on Iron Chef America, as a contestant on Next Iron Chef, with Rachael Ray on her show $40 a day, as well as his own local shows Kandela and the current running 4 Minutos con Chef Treviño.

Magazine and newspaper articles abound as well, and Chef Treviño has been featured in Conde Nast Traveler, the New York Times, Bon Appetit, and Gourmet among others.