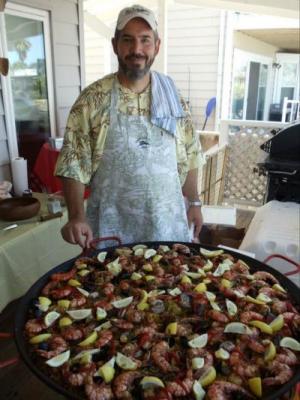 
Michael Labrador currently resides in Southern California and is the President of an Aerospace company. An avid hunter and fisherman, Michael’s passion for cooking is only surpassed by his passion for family. Married for 21 years, he and his wife, Paula, spend most of their time enjoying time with their 6 children; Desi (20), Francesca (19), Mia (16), Joaquin (10), Renata (7), and Carmen (3). Michael's culinary passion is Paella, a Spanish rice dish, that he has spent his entire life perfecting, as did his Father before him. Michael has fed as many as 200 people Paella out of one gigantic pan, prepared over an open flame.