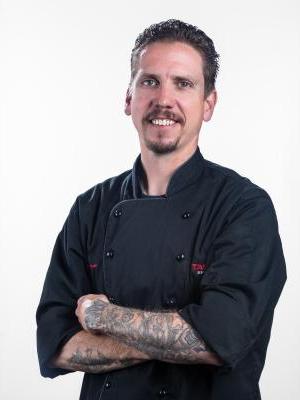 
Chef Christian Messier is the Corporate Chef for Taco Mac Sports Grill where he oversees 28 restaurants with locations in Atlanta, Charlotte, N.C., and Chattanooga, Tenn. Prior to joining Taco Mac, Chef Christian spent a decade in fine dining restaurants at some of the country’s most highly-regarded resorts and hotels including The Sun Dial Restaurant at the iconic Westin Peachtree Plaza in Atlanta, the Renaissance Grand in St. Louis and the AAA Five-Diamond Phoenician in Scottsdale. Before becoming a chef, Chef Christian was the lead singer for five different rock bands throughout the late 1980s and 1990s. Between rehearsals, concerts and touring, he honed his skills in the kitchen with positions from pizza maker to line cook to country club sous chef. Chef Christian graduated from the Scottsdale Culinary Institut, Le Cordon Bleu in Scottsdale, Arizona. He is a member of the Research Chefs Association. Chef Christian is also a certified Harley-Davidson mechanic and in his spare time you can find him on his custom 2004 Night Train.