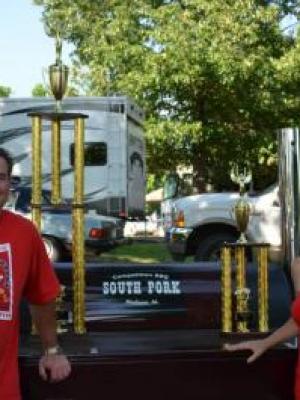 
South Pork is a husband and wife team that consists of Scott and Suzanne Burton from Madison, AL that cooks on a Jambo smoker. Scott started smoking meat for company picnics and friends back in 1999 on a Brinkman Smoker. Due to numerous recommendations from co-workers and friends, we entered our local BBQ contest, The WhistleStop Festival, in 2004. At that first contest we got 5th place in pork and a check . For a team that had never competed, we were stoked and immediately signed up for several more competitions. We were named Grand Champion in Springville, AL within our first 18 months of competition. We were named Chicken Team of the Year in 2011 by KCBS. We got 3 - 180's for Chicken, Pork & Brisket and finished in the Top 25 in Chicken and Pork in 2012. In our last 13 contests we have won 4 Grands and 4 Reserves. We have competed as far west as Las Vegas, NV; as far north as Kansas City, MO; as far east as Gaffney, SC; as far south as Daytona Beach, FL; and Internationally, with Buttrub.com, at the 2011 Grill Stock Festival in Bristol, England where our team was named King of the Grill.