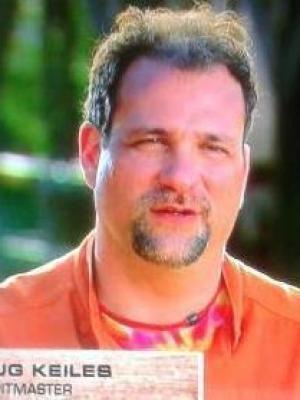 
For the past 11 years, Doug Keiles has been the Pitmaster and Captain of the Ribs Within BBQ Team, from Hillsborough, NJ. Doug is a driven competitor who loves BBQ almost as much as he loves his family (and the Mets). Although he has no formal training in any food related area, Doug is also a seasoned griller and who took to smoke and charcoal like it was second nature. Doug has led Ribs Within to Grand Championships in both BBQ (2) and Grilling (5) as well as multiple Reserve Grand Champs and over a hundred of trophies, too. He also appeared on Food Network CHOPPED: Grill Masters in 2012. At 6’6”, Doug Keiles has done a lot of eating in his life. While he enjoys all types of foods his passion is for any food cooked (or smoked) with fire. Growing up in a kosher household, he only got to grill chicken and beef, but since moving out he has learned to cook anything on the grill or the smoker. For the past 11 years, all year long – even in the depths of the NJ winter – you can find him cooking something on any one of his 10 grills (4 smokers and 6 grills). He does this not only to feed his family and friends, but to test flavors and combinations of his Ribs Within line of RUBS and Seasonings, which currently has 10 different flavors available on his website www.ribswithin.com. His favorite food he makes is his homemade bacon, using his own rubs and brine and fresh pork belly from the Amish in Lancaster, PA. He used his own bacon to win the Hudson Valley BBQ Contest's Bacon Wrapped category, Aug 2013.