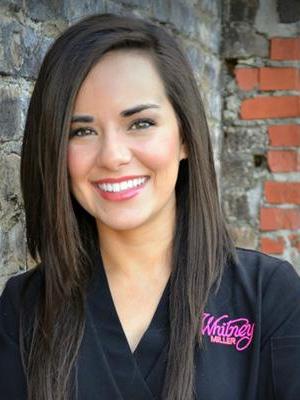 Inspired by the hospitality of her 97 year-old great-grandmother and creativity of her mother, Whitney Miller’s passion for the art of cooking began at an early age. At twenty two, she won the show “MasterChef,” gaining the title of Fox’s 1st U. S. MasterChef. Soon afterward, Whitney obtained her degree, with an emphasis in nutrition, from The University of Southern Mississippi.

Whitney conducted cooking demonstrations at the 2011 Chicago Home and Housewares Show with celebrity chefs such as Guy Fieri and Curtis Stone, 2012 Cape Town’s Good Food and Wine Show in South Africa with chefs such as “Cake Boss” Buddy Valastro, UK’s “The Spice Prince” Reza Mahammad, and Italian Michelin Star chef Giorgio Locatelli,  2012 Women’s Health magazine’s Chicago and New York City “Are You Game?”, and 2013 Chicago Home and Housewares Show in addition to numerous private and corporate health symposiums for Southern Power in Mississippi, Alabama, Florida, and Georgia, and Blue Cross Blue Shield. Her cooking demonstrations have also been featured in the Masterchef app. As the youngest contestant and winner of Fox’s first America’s Masterchef, Whitney continues to inspire children, youth, and young adults, through cooking demonstrations and speaking events at public and private schools, culinary classes and colleges, and children’s museum events across the United States.

Whitney has been featured across the globe in Southern cuisine cooking promotions, the latest being The St. Regis Tianjin in China. In January, Whitney was featured as the opening night chef (the first Southern chef) at Chefdance 2013 within the Sundance film festival, cooking for celebrities such as Kenny Loggins and photographer to the stars, Norman Seeff.

Whitney’s professional career includes developing recipes and/or creating videos for companies such as SousVide Supreme in the U.S. and Malaysia, magazines such as Clean Eating and Southern Living, and nonprofits such as the Mississippi Girl Scouts of America. Whitney has conducted guest cooking classes at Viking Cooking Schools in Mississippi and recently, in February 2013, Surfas in Costa Mesa, CA.  Working with Panera Bread as the featured food expert, in July 2013, she hosted an online chat, giving cooking and entertaining tips. Whitney currently acts as a frequent guest host for ABC’s Birmingham Talk of Alabama’s TV cooking segment.

Sharing her incredible story of determination and dream-come-true winning of Masterchef, as well as her faith and passion for family, hospitality, and cooking, Whitney acts as a motivational speaker and presenter for organizations/ events: Auburn University and the American Business Women’s Association; 2013 Mississippi Girl Scouts of America Gold Award Ceremony, 2013 University of Southern Mississippi Nutrition Alumni Banquet, and Gulfport, MS, Women’s Blessings Conference; national events such as the 2012 Myasthenia Gravis National Conference in Las Vegas and international events such as the 2012 Gulfood Show’s (World Food Leader’s Summit) in Dubai.

Whitney is the author of the cookbook Modern Hospitality: Simple Recipes with Southern Charm (Rodale), with foreword by Gordon Ramsay, and is currently working on her second cookbook. Her recipes have been featured in the Masterchef and Ultimate Masterchef cookbooks. She is a food writer of magazine articles for Flavors (Atlanta), Taste of Home, Southern Living, and Eat. Drink. Mississippi. Her recipes, articles, and/or book promotions have appeared in People, Women’s Health, Masterchef, Clean Eating, and Cooking Light magazines as well as online at Self, California Olive Ranch, and SousVide Supreme.com.