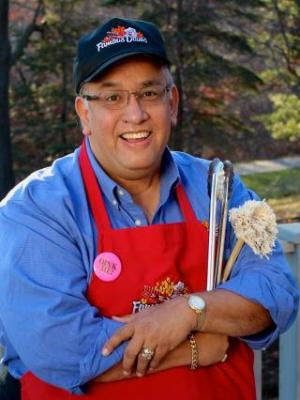 Dave Anderson is best known as “Famous Dave,” founder of Famous Dave’s of America, with its more than 187 restaurants and growing. Famous Dave’s has received unprecedented recognition as one of the “Hottest Concepts in America” by Nation’s Restaurant News, reaching over $500 million in sales.

Famous Dave has appeared on national programs on many major networks including “Regis and Kathy Lee,” CNBC’s “The Big Idea with Donny Deutsch,” The Discovery Channel, The Food Network, FOX Morning Show, The Travel Channel, and “The Oprah Winfrey Show”—where he received Oprah’s Angel award for his leadership work with at-risk youth. In addition, Dave has received a prestigious Presidential appointment—which required a full senate confirmation—and has served several governors in advisory positions.

Famous Dave is the author of six books including the award-winning Rib-O’Licious Cookbook and just released in 2013… Famous Dave’s Barbecue Party Cookbook: Secrets of a BBQ Legend!