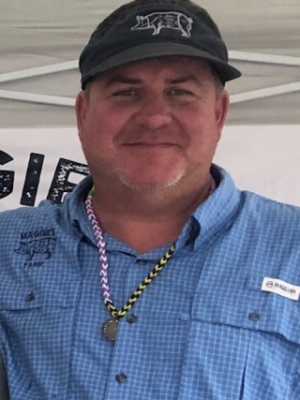 
What was once a hobby for Chad Whittington has turned into a food truck and catering business called Maggie's Farm: Outdoor Southern Cooking. Chad has been cooking in various types of competitions in the state of Alabama for about fifteen years. He has always been fortunate to have a close group of friends who share his passion for cooking and who are willing to help in the planning and implementation of competitions. He has competed several years at the Alabama Wildlife Federation Wild Game cook-off in Guntersville, Alabama and won the overall winner plaque on two separate occasions (2015 & 2017). He won 1st place at the Greater Tuscaloosa Chili Cook-off in 2015 and won crowd favorite in the Gadsden Chili Cook-off that same year. Most recently he won crowd favorite at the ALS Bham Burger Fest in Birmingham, Alabama July 2019 and 1st place at the Burger Battle in Gadsden, Alabama in August 2019 to earn his "Golden Ticket" to Dallas. Chad has also qualified for the SCA World Championship for 2021. Chad is excited to participate in the 2019 World Food Championships as this is his first competition in this setting.