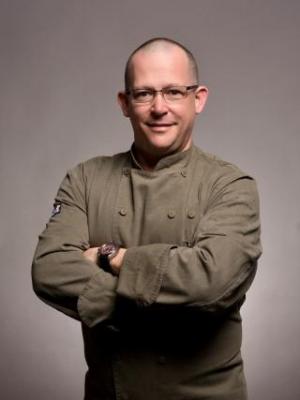 
Chef John O’Neil began cooking at the age of three when his mother caught him at the gas stove making “eggies” while standing on a chair. “I almost burned the house down,” Chef John says, “…but, I’ve been interested in cooking all of my life.” His father worked as a cook during John’s youth. They didn’t have much money, so special occasions were celebrated by preparing a meal from scratch together at home. “My father taught me how to make homemade pasta and ravioli,” he says. “Those times are some of my fondest memories as a child.” Following his honorable discharge from the Navy, and working in kitchens in the Phoenix area, John graduated from Scottsdale Culinary Institute and began chef-ing in kitchens from Arizona to Texas. He mentored with renowned Chef Bernie Kantak (of Cowboy Ciao, Citizen Pub House, and The Glady in Scottsdale, AZ) and Nobuo Fukuda (of SeaSaw in Scottsdale, AZ). As Chef de Cuisine at Cowboy Ciao, he created dishes to pair with neighboring Kazimierz Wine Bar’s selection of 3,500 wines. Moving to Dallas, John worked in several renowned Dallas restaurant concepts before he became the Lead Culinary Instructor at Collin College’s culinary arts program. There, he taught every class offered, including International Cuisine, Saucier, Baking/Patisserie, and Meat Fabrication. He also developed a teaching manual Fundamentals of Stocks and Sauces for the Saucier course, as a quick-reference guide for students to take into their careers. John authored a second book Cooking With Essential Oils which is sold on Amazon. John turned his attention to coffee, owning a coffee shop in Boulder, Colorado. There, he learned the coffee industry, the art of cupping, and science of roasting from Matt Kay, the owner of Silver Canyon Coffee, the first locally-owned coffee roaster in Colorado. Chef John loves to travel and learn local cooking and cuisine. He has cooked traditional Chips Mayai in the remote Seregeti, learned about Pili-Pili chile peppers in Tanzania, observed slaughter methods in a Masai market, and cooked in traditional Swahili dishes on grass-mats in a woman's home in Zanzibar. He experienced an organic farm outside of Havana, Cuba where he learned to make sugar cane mojitos and whole suckling pig over live fire. In Hawaii, just before the pandemic shut down, he learned to make traditional Spam Musubi's with a local Hawaiian chef. Combining his love of travel with his love of all things barbecue, John developed a series called Backroads and BBQ where he travelled all around Texas filming barbecue joints and other hideaway places you find on the backroads of Texas. In the early pandemic of 2020, John ran across his spice diary that he began as a young chef where he kept notes and formulas of different spice blends he created and dishes he made using the blends. As the pandemic caused everyone to spend more time at home and in the kitchen, Chef John found himself returning to his spice diary and experimenting with the blends he created in his youth. “Why don’t you sell your spices?” his wife asked one day in early 2020. That was when his spice company was born. John’s food philosophy is that food is a common denominator that unites people. Whether at a state dinner between conflicting countries or a Thanksgiving table between fractious family members, food provides a common experience that brings people together.