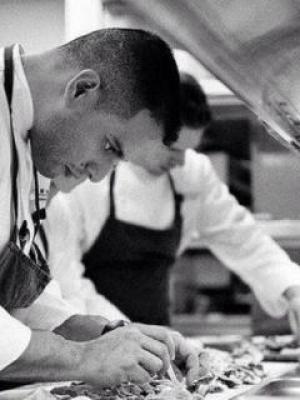 
Daniel Ontiveros showcases his talents on a day-to-day basis as Executive Sous Chef at the Strip’s premier French dining experience, Comme Ça at The Cosmopolitan of Las Vegas. Throughout his 9 year culinary career in Sin City, the star chef has earned his stripes working at some of the most popular restaurants on the Strip. The culinary field is known as a profession of passion, and Ontiveros is a bold example of that premise, having believed since he was a 10 years old that cooking is in his blood. His first role at the helm of a menu was with acclaimed Chef Michael Minas Nob Hill Restaurant, where Ontiveros assisted executive Chef Josh Craine with their James Beard Award Nominated menu. Ontiveros keeps a keen eye on the quality and freshness of his ingredients, as well as social responsibility, through working closely with local farmers and sustainable seafood purveyors. He attributes his varied influences to everything from childhood memories to Classic techniques. Ontiveros started his career at some of El Paso Texas finest restaurants In 2005, Howard left Texas for the burgeoning culinary city of Las Vegas. He accepted a position of Chef de Partie with Thomas Keller’s famed Bouchon Bistro with Executive Chef Mark Hopper, a prominent culinary influence for Ontiveros. The culinary team received multiple awards and accolades including four Las Vegas Life Epicurean Awards in 2006 including “Best New Restaurant on the Strip.” The celebrated restaurant was also named among Saveur Magazine’s “100 Favorite Restaurants,” and received the Wine Spectator Award of Excellence for two consecutive years. Following nearly four years with The Thomas Keller Restaurant Group, Ontiveros accepted a position as Sous Chef at Micheal Minas acclaimed Nob Hill Restaurant inside the MGM Grand Hotel .In 2010 Ontiveros accepted a position to work alongside the talented Michelin three star team under Joel Robuchon at the Mainsion. Following 2 years in a 3 Michelin Star setting Chef Danile Ontiveros Came On as executive Sous chef David Myers Las Vegas restaurant, Comme Ça, which hails from its popular flagship location in West Hollywood. In his role, Ontiveros crafts complex dishes as he assists in executing the dynamic menu, which features French bistro fare with a modern twist, in addition to overseeing a culinary team of the highest pedigree. Ontiveros immense passion and dedication perfectly position him to deliver the exceptional vision and execution of a David Myers Group experience. Since Ontiveros has resumed the role as assisting the executive chef at Comme Ça, the restaurant has been awarded many accolades, including the Wine Spectator “Award of Excellence;” “Best Restaurant” by Desert Companion and 944 Magazine; and “Best Power Lunch - Las Vegas” by Worth magazine. Comme Ça also received an “A” in every category by the Las Vegas Review-Journal and Comme Ça’s famed ‘Penicillin’ was selected as “Best Cocktail” by Vegas Seven weekly newspaper and many more ..