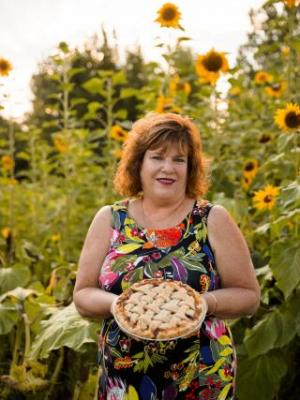 
Lois is a self-taught amateur baker/cook an a native of the great state of Michigan. She first started entering contests on the local level over a decade ago. After a first place local win in 2011, Lois had the confidence to compete on the national level. She competed annually with the National Pie Contest put on by the American Pie Council. She competed from 2011-2018, placing twice over that stretch. Lois continued to refine her skill, traveling to Washington State for a week-long pie camp in 2016 and eventually qualifying for her first World Food Championships in 2017. Lois has become a regular within WFC. Year after year, Lois constantly works for that coveted first place win. As the pandemic set in, Lois found a way to be innovative. She entered numerous online competitions leaning on her competitive spirit and continuing to innovate. Over the course of the pandemic, Lois took 2nd place in the WFC Taco Takedown, 1st place in the Lard Lovers contest sponsored by Melissa's Produce, and a 1st place in the Michigan Department of Agriculture's Best Burger in Michigan contest. Even with Lois's successes in online competitions, she is eager to return to the traditional format. While Lois' competitiveness has grown over the years, one constant is her sense of altruism. Lois uses her gifts to "Pie it Forward" to anyone within reach. She has been providing monthly meals for at risk and homeless teenagers for eight years. Lois also bakes birthday cakes for the Marie Antoinette program in the Detroit area. This group matches bakers with children in need of a birthday cake. Lois also travels to help server the broader community, having donated time and talents to a major fundraiser for St. Jude hospital during the FedEx PGA tournament in Memphis TN. Lois has plenty of projects to get excited about. She is in the top 10 of the Biscuit Jampionship that will take place at the 2021 WFC. Lois' Sassy Pants Pickles will be produced by the Jelly Queen later this year. She is also looking forward to preparing a farm to table dinner with her good friend Lisa Gwatney at Bonton Farms in Dallas at the end of August 2021.