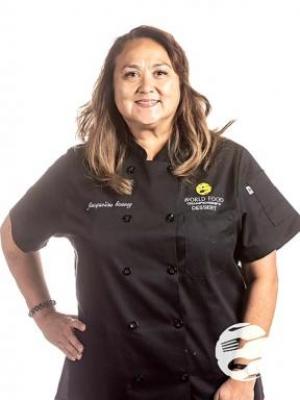 
Baltimore native Jackie Seavey is the Executive sous chef at the Island View Casino Resort since the 2006 grand opening of Gulfport’s only casino resort, but she has worked the Mississippi gulf coast gaming F&B industry since her return to the area in 2003. With a background in accounting and a diverse culinary career spanning over two decades, Chef Jackie assists the Executive Chef in overseeing and managing all aspects of kitchen operations for multiple restaurants and food outlets ranging from casual to fine coastal dining, a 500 seat buffet, banquet departments, coffee and confection shops, and special event catering. Chef Jackie has been featured in local commercials and magazines, several televised cooking segments and programs, and is sometimes the featured demo chef for large group cooking classes. Inspired by local, regional, and international cuisines, Chef Jackie’s grandmother and Thai mother heavily influenced her passion for cooking at a very young age. After a brief career in accounting, she attended culinary school in Baltimore in 1998 while serving a simultaneous two year culinary externship in a classical French restaurant. She graduated culinary college in 2000 while raising two young children and working full time. She continued working in Baltimore area restaurants until moving to the MS gulf coast in 2003. She is committed to sharing her knowledge through mentoring programs and assisting career-related organizations, serving two terms as chapter president and two terms as board chairman for the MS gulf coast chapter of the American Culinary Federation. She was awarded the MGCCACF Chef of the Year award in 2008 & 2011 for organizing several culinary competitions as fundraisers for the organization. Chef Jackie believes in honing her cooking skills by actively participating in food sport competitions. In the past, she has won many medals participating in ACF south east regional competitions in categories including poultry, bread, dessert, and others. She won the WFC world open chili championship in Orange Beach, AL in 2018 that qualified her to compete against nine other category champions at the Final Table showdown in New Orleans in May 2019, where she won the title of world food champion, the prize purse of $ 100,000.00, and had her winning dish placed on Antoine’s menu (the oldest restaurant in the French Quarter) . Chef Jackie continues to compete in the World Food Championships annually. After winning the WFC 2018 Final table, she placed in the Top 10 chili in 2019 and Top 10 dessert 2021. She continues to immerse herself in popular and classic food trends, while practicing new techniques and recipes to sharpen culinary skills.