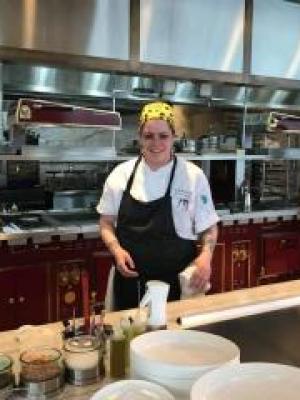 
I have been working in the culinary world since I was fifteen years old. After I attended college for a degree in English, I decided to join a competitive culinary apprenticeship at Colonial Williamsburg in Williamsburg, VA. This three and a half year program changed my life. It takes each apprentice through an extensive training in all areas of the kitchen. In this program, I discovered a fighting competitive spirit with food through many menu writing and execution opportunities. This is also where I met my fiancé, who will be competing with me at the WFC. After the apprenticeship, Jake and I travelled to St. John in the Virgin Islands, where we worked at Caneel Bay Resort for a full season. We planned on going back, until Hurricane Irma and Maria devastated the small paradise we knew as home. Picking up the pieces, we accepted positions at Columbia Country Club in Chevy Chase, Maryland. After a year and a half at the club, we moved onto opening a hotel, the Conrad by Hilton in Washington D.C. I work at the restaurant Estuary, which is the Voltaggio Brothers newest venture.