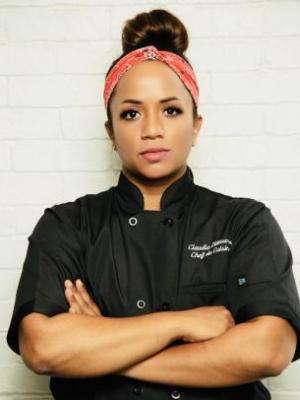 
Claudia Diawara has been cooking for over a decade long, Chef Diawara has recently been a Private Chef and New Business Owner of Green Lab Kitchen in Marietta, GA. Chef Claudia was born in Colombo, Sri Lanka was adopted and raised in Zurich Switzerland. Growing up in Zurich and dreaming of the big stage, Claudia decided to “run away with the circus” and became an accomplished contortionist act for the beloved Cirque. After realizing her true calling Claudia decided to enroll in the Culinary Arts, her trust passion. Chef Claudia’s life has revolved around the culinary world since she was a young lady. Beginning her career she started of in the front of the house, but soon gave way to her true passion the creation of the food being served. Leading her to enter into the domain of the kitchen. Beginning in the kitchen Chef Claudia started to work in the hottest kitchens in Zurich, Switzerland. After just a few short months Claudia was promoted to Sous Chef and later became Executive Chef. While working a full time job in the kitchen, Chef Claudia was able to complete her studies in Culinary Arts. While having various opportunities to travel and Stage throughout France and Italy, Claudia was able to make the most of her time learning and working with the best. In 2015 she founded Green Lab Kitchen a meal prep and catering company which became a huge success and launched her company to the next level. While running her company Green Lab Kitchen, Claudia does double duty by working as a private chef for various professional athletes as well as catering to corporate accounts and events.