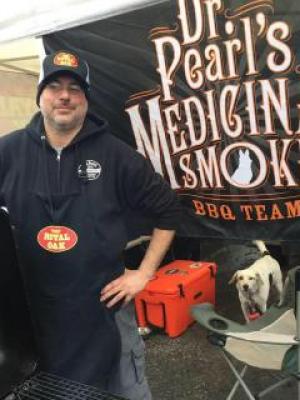 
I began competing in BBQ as a challenge with a friend. Both backyard cooks, we decided to enter our 1st KCBS competition in Wildwood, NJ in 2010. We watched BBQ Pit Masters and though we could do that. We were very "green" and had dismal results. My friend decided it was not for him and I continued to try and "figure it out." I named my team after my late dog Pearls and through practice, eventually received my 1st calls in 2013. I continued to learn KCBS BBQ and eventually had some success, including our 1st Reserve Championship in 2016 and our 1st Grand Championship in 2017. We competed at The American Royal Invitational in 2017 and The Jack Daniel's Invitational in 2018. 2018 brought the SCA to the Northeast and we began to seek out more SCA steak cook-offs. I had success with the steak cook-offs, consistently in the top 10. April 2019 I won my 1st SCA Championship, qualifying me for the 2019 SCA World Championship and the 2019 World Food Championship. I recently, June 2019, won my 2nd SCA Championship along with my 2nd Reserve Championship. I look forward to bringing my cooking skills to Dallas in October!