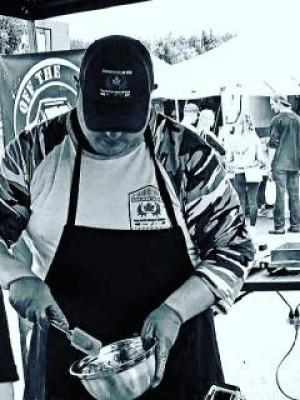 
Self taught home cook who won SN-01 EP-01 of Wall of Chefs was Top 50 on Master Chef Canada (SN 2), & currently hosts a silly little TV Show about chip stands in Northern Ontario (Off The Chip Wagon) as well a radio BBQ feature (BBQ-927Rock). In 2016 I did win \"Best Restaurant Dish\" at Taste of the North even though I am not a restaurant & won "Peoples Choice" at the 2018 event. I was lucky enough to be invited to cook with Team Canada BBQ in 2017 at both \"Stars & Thunder\" in my home town of Timmins, ON as well as at \"Praise The Lard\" in Murphysboro, IL. Established Broken Antler BBQ in 2018 & we had some success including several top 25 finishes at Oinktoberfest 2018 and 4th at Ayr, ON for pork. I love using and supporting local producers and showcasing the best grocery store that one could hope for...because I live in it year round. Fishing, hunting and foraging, we have it all here in Northern Ontario! Bottom line is that I believe in always having an open spot at my kitchen table for a friend.