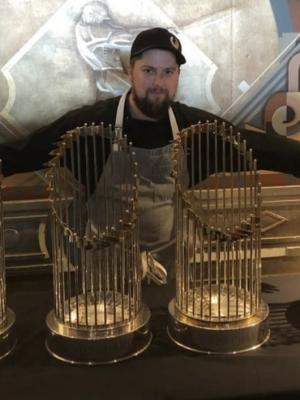 
Learned to cook with my grandmother at the age of 4 years old. I could scramble eggs, make macaroni out of the box, assisted in sauce preparation, and made desserts from scratch. It remained a hobby and developed into a skill that set me apart from the pack of the norm. I was recommended to attend culinary school and thought there was no other way. Excelled through classes at Johnson & Wales University, where I participated in many competition style training courses and worked two separate internships at two very well rated but very different hospitality settings. The first was at the Seaport hotel in Boston and it’s affiliated companies of Fidelity Investment and the World Trade Center, Boston. Then in the keys of Florida at a world renowned resort named Cheeca Lodge & Spa is where I practiced pastry and many kitchen skills. Then my son was born and I have spent every since as journeyman in establishments all around New England and been a private chef for some of America’s wealthiest people.