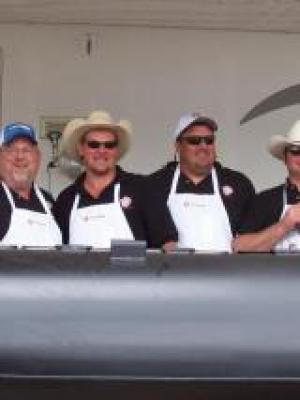 
As the oldest of four boys I was often called on by Mom to help her in the kitchen. “Don’t burn my roux,” was not what I wanted to hear when I was eager to go fishing or just get out of the house. Unknowingly she planted a seed in me. In my late teens I started cooking on my own. The birth of the Blazed & Confused Cooking Team took place 15 years ago. We have cooked many different contest, winning some! I love cooking for big numbers, my personal best 3250 servings of gumbo. Bo Johnson and I have cooked together for more than 20 years. Blackberry dumplings one of our first and I think that got us banned from the kitchen for a long time. What a mess! A lifelong friend and to share the same passion for food, we do make good food! Joe Bruno, I had to teach him a lot, but that boy can cook! Joe hired me four years ago to ARAMARK. I often remind him that was the best move he made as a manager. Joe quickly became part of Blazed and Confused, his knowledge about food is massive. The truth is, Joe has taught me a lot about food. Blazed and Confused coming to Vegas, ya'll hang on, we got some good stuff for ya.