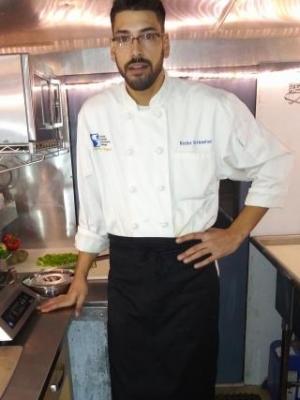 
Recipient of a Golden ticket through the 2018 Tolbert Washington state chili cookoff: Chef Keifer Scrimsher is a graduate of south seattle college's culinary arts program, clasically trained in french cusine with emphasis on northwest cuisine. "Using locally sourced, fresh and sustainable ingredients is the approach to northwest cuisine, and I do that whenever possible." After 4 years of cooking under numerous talented chefs he found himself working as a "party chef" for one of the top 50 caterers in America. Cooking for many of Seattle's high end clientele such as former Mariners player Raul Ibanez, and even a party that former president Barack Obama attended. Currently, he has ventured off on his own and started a career as an electrician. In order to finance his growing catering business and custom food truck, Big Keif's deli & catering.