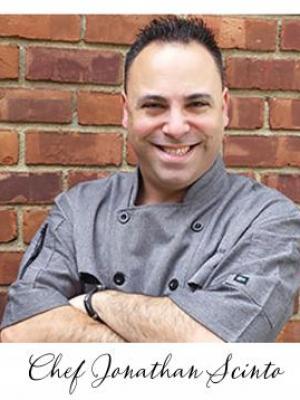 
Chef Jonathan cooks with passion in every dish he creates! Growing up in an Italian and Jewish family,\r\n(a.k.a the Pizza Bagel) the Long Island native utilizes rustic Italian flavors and Asian influences to create\r\nmodern fusion cuisine. Back in May Chef Jonathan was asked by Newsday about his cooking style he\r\ntold the journalist that he relies on his design knowledge to create plates of art work. “You eat with your\r\neyes, then your mouth, so it’s important to grab your attention at first site then first bite, I don’t\r\nbelieve in using pre-made ingredients, I use only the freshest herbs and spices for my clients to\r\nachieve my #boldassflavors”.\r\n\r\nWhen most toddlers where watching Sesame Street, Chef Jonathan was watching Julia Child. His mother\r\nAlison allowed him to experiment in the kitchen. He would use the blender to make crazy concoctions,\r\nscrambling eggs on the floor and even practicing his knife technique on his parent’s new vinyl chairs. The\r\nlove of food was evident to all to his mom and dad. How could his mother say no to fresh pasta made by\r\na 4 year old?\r\n\r\nChef Jonathan graduated from New York Institute of Technology in Old Westbury, NY where he received\r\nhis BFA degree in Graphic Design. After graduation he was hired with the well-known post-production\r\nhouse Post Perfect. Chef Jonathan was in charge of catered events for A-list celebs and CEO’s. After\r\nSeveral years of working in Manhattan, Chef Jonathan felt he needed to pursue bigger culinary\r\nchallenges. He opened up a 40 seat Café in Bayshore, N.Y called HOME COOKIN CAFÉ. The Style of\r\ncuisine was scratch cooking with a focus on Italian-American fusion using healthy options. With many\r\nsuccessful years as a restaurateur he decided to sell the café and pursue other ventures.\r\n\r\nHis love for cooking shows and competitions burned inside him. “I always spoke about this to my\r\nmother Alison, who used to watch the original Iron Chef Japan with me, she told me one day you\r\nwill have your own cooking show”. His wife Annmarie loved cooking shows just like Chef Jonathan’s\r\nmother. She would watch the Food Network with him and shows like Emeril Live, Iron Chef and\r\nMasterChef. \r\n\r\nIn Oct 2014 Annmarie pushed him to audition for FOX’s hit TV show Master Chef Season 6.\r\n“I think she was tired of all the excuses!” “You’re super talented and a natural in front of the\r\ncamera, Annmarie said, of course they’ll put you on TV! Without her support it never would have\r\nhappened, he never looked back”.\r\n\r\nChef Jonathan was on MasterChef Season 6, NBC, CBS, NEWS 12 LI, Newsday and this October\r\nhe will be part of the Food Network and Cooking Channels \"Chopped Live\"\r\nhttp://nycwff.org/chopped/. You might have heard his voice on several airways like iHeart Radio, Tune-In, Grindhouse Radio and The Wiseguyz Show. Chef Jonathan’s has had several articles published in Culination magazine about his culinary journey.\r\n\r\nGiving back to the community is important to Chef Jonathan. He currently helps such organizations like\r\nSt. Jude Children\'s Hospital, March of Dimes, New York Sportscene Children\'s Foundation and CN\r\nGuidance just to name a few.\r\n\r\nChef Jonathan is a currently working as a Personal Chef and TV Personality doing Private Dinner Parties,\r\nEvents, Live Cooking Demos and Celebrity Functions. Chef Jonathan is also an Artist designing logos,\r\ndeveloping creative concepts and unique products. He’s a Spokesman and Ambassador for Murph’s\r\nFamous Bloody Mary Mix, Chef Spoons, Zesteez Chutneys and Cutting Boards 2 Go. Coming out\r\nsoon will be Chef Jonathan’s line of utility and cutting boards made from exotic woods and distinctive\r\npatterns.\r\n\r\nChef Jonathan lives on Long Island, New York and is married to Annmarie Scinto, they have 3 daughters.\r\nCatch up with Chef Jonathan on social media @chefjonathans and at www.chefjonathanscinto.com.\r\nTo Book Chef Jonathan Email: chefjonathans@gmail.com