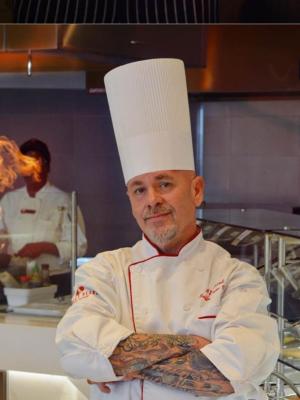 
I have been a chef in the gaming industry 26 years. Originally from Memphis TN, I started my career at Fitzgerald’s Casino in Tunica Ms. I moved to the Mississippi Gulf Coast after my youngest son was born and went to work at Grand Casino Gulfport. In 2005 Hurricane Katrina devastated the Gulf Coast, after a short time in Atlantic City NJ I returned to the Gulf Coast and went to work Hard Rock Casino. After moving on to bigger things, I landed at Scarlet Pearl Casino. I really enjoy working for the Scarlet Pearl Casino, they are very family oriented and an all around great company to work for. Over the course of my career I have won numerous awards including Gulf Coast Seafood Festival Gumbo Cook Off Championship, 2016 Chef’s of the Coast, 2017 2nd place 2015 & 2016 BBQ Under the Oaks winner, and numerous other awards, but the most important 2017 Top 10 at World Food Championship.