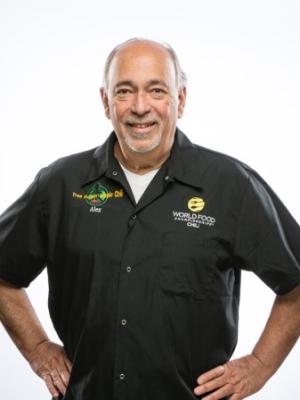 
I am a Chef who developed culinary skills through cooking in competitive competitions for 22 years. My formal training consists of attending classes at the Culinary Institute of America, Napa CA, Ramekins Culinary School, Sonoma CA and working at the Petaluma Elks Club 901 as a Chef for member dinners. My competitions have supported charities throughout the country. My local competition participation has contributed to raising $105,000 for Petaluma’s Children’s Theater. I have won four Chili Appreciation Society International (CASI) California State Championships and have competed in the Terlingua International Chili Championship five different years. My resume is enhanced by winning the 2015 Hormel Chili Nation Championship. I have competed at the Healdsburg Executive Chef Chili cook off representing Thumbprint winery. In a pack of 29 Executive Winery Chefs in 2014 I won 2 of six categories and in 2015 I won 4 of six categories. My team has competed at the World Food Championship Chili category for the last 5 years and finished in the Top 10 in 2016 and 2017. In 2016 we finished first in the Structured category. Recently I have won two competitions in Southwestern Cuisine in the Fresh Chile Company competitions in July and November 2020.