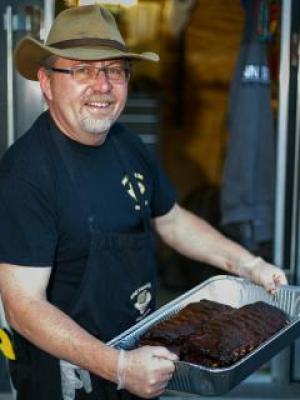 
BBQ and family are synonymous with the Big Head Ed BBQ Team. Big Head Ed began his BBQ career by cooking whole hogs in cinder block pits (built on site by hand) for friends and family in the 1980's. With a Master’s Degree and background in animal science from The University of Connecticut, and Penn State, Ed was the go to guy "aspiring" pit masters called when things didn't go right. As requests for Pig Roasts and BBQ Catering grew, customers encouraged Ed to enter the lauded Memphis Barbeque Network (MBN) "whole hog contest" in New Hampshire. Armed with passion, sauce, and a background in Animal Production, Big Head Ed had no idea how contests and on-site judging worked. After a lot of fun, and learning MBN turn in traditions, the team took home 5th in Shoulder, 4th in Ribs and 2nd in Whole Hog on their first go! Since then The Big Head Ed BBQ Team has competed in regional and national BBQ competitions as placing consistently in the top 25% and proudly joined with friends on the Bare Bones BBQ Team, to place in the top 10 at the World BBQ Championships in Memphis. For the past 11 years, when not around the pit or family, Big Head Ed spends his days as the Superintendent-Director of the Minuteman Regional Vocational Technical School District in Lexington MA. He takes great pride in working with teachers and students. Each year conducts a “BBQ Institute” with the Culinary Arts students that ends with serving slow smoked BBQ to the entire school in the student operated restaurant. In the Fall of 2019, a new $145M Vocational Technical High School will open its doors under Big Head Ed’s direction and leadership which will, of course, include a real wood smoker in the student kitchen!