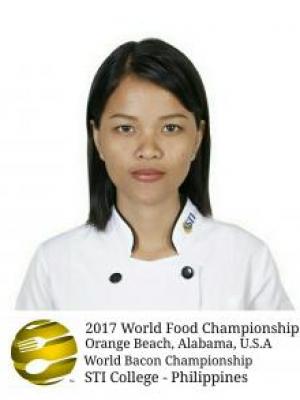 
My passion for cooking began when I was in my freshmen year at STI College Alabang. But when I was still living in my hometown, I already have interest in kitchen. My courses in college taught me a lot. I began to love kitchen life. I am a perfectionist when it comes to plating, taste and cooking methods. I began competing back in 2014 and I won as 1st runner up. Since then, my eagerness in culinary competition becomes higher. I joined cooking competition in my school, became champion and a representative for a cluster level but fate was so cold for me. Despite of that, I never stop competing until "The Great Adobo Cook-Off" presented by HMR Philippines and Deli Chef came. I joined and yes, I was so blessed. I am the grand champion of the said competition. "Adobo" is the all time favorite dish of Filipinos. The umami taste and international appeal of my masterpiece brought me a glory. That was the most unforgettable journey of my passion and love for cooking. I was able to have some cooking demo in malls and facebook commercials. I also joined the "Umami Culinary Challenge 2016 & 2017 - a national culinary competition of different schools in the Philippines. I am so happy to be part of 2017 World Food Championships. And most of all, I am very proud to represent the Philippines in this competition.