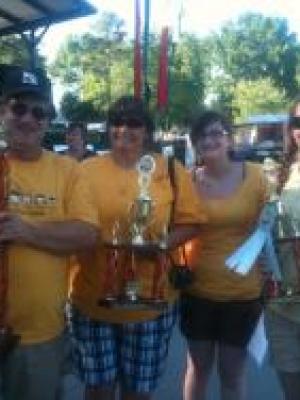 
A life long cook and food enthusiast, I was introduced to the world of competition BBQ when I was invited to attend the Jack Daniels World Championship 15 years ago. I figured, Whiskey and BBQ, what the heck ? Count me in! I was quite taken with it and can truly say my life was changed for ever. I became a judge, then master judge and finally a competitor. In 2004, searching for an activity our whole family could participate in, we launched our team in the KCBS Pro circuit. Scoring two first place awards and a top ten overall in our very first event, we were hooked. We ended the year by taking reserve in Douglas Ga. and the girls were featured on the Food TV special "Grill Gargantua". Because of the TV show, Anna is forever known as the little girl with the chicken hat.