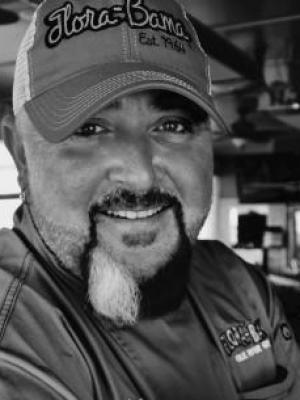 
Chef Gibson started his culinary career “flippin’ burgers” at the local Hardee’s restaurant and kept moving by trying his hands at tossing pizza dough at the local Domino’s and Pizza Hut. Chef Gibson has always been in or near the restaurant business by either being head bartender, food and beverage director, or a restaurant general manager. It wasn’t until he started traveling around the U.S. and a few years in Sicily, when things just “clicked”. “This is what I want to do, this is me.” After returning to the states he attended and graduated with honors from Le Cordon Bleu in Pasadena, CA. He was also fortunate enough to work along side of Cat Cora and Guy Fieri at the 2006 L.A. Food and Wine Festival and worked with two star Michelin Chef Edouard Loubet. He has made numerous appearances performing cooking demonstrations at the 2009/2010/2011/2012 Taste of Newport, KTLA morning news, Orange County Register, “Cooking with OC Chefs”, Coast Magazine, KABC 790AM Chef Irby’s “Bikini Lifestyles” radio show, and published in Chef Irby’s “The Complete Idiot’s Guide to Cooking Quinoa” cookbook, and has recent appearances on Food Network series, "Beach Eats U.S.A." with Curtis Stone and "Beach Bites" with Katie Lee. He was the Executive Chef of The Beachcomber Café at Crystal Cove and became a driving force in Californian Coastal and Southern Cutting Edge Cuisine in Orange/LA County and was labeled “King of Coastal Cuisine” in Orange County. Chef Gibson's southern culture, extensive travel across the U.S. and Europe, classic French culinary training and access to the best local ingredients have added a new dimension and twist on comfort food and coastal cuisine. “I prefer to call it coastal comfort cuisine. This is when I take comfort food that you or I grew up with and put a different spin on them but staying true to the ingredients inside the dish itself.” Using all of his talents and experiences and the setting of being on the beach, Chef Jon brought coastal cuisine to a different light with subtle touches of Southern, Pacific Rim, Southwest, and European cuisines incorporated into the menu’s that he changes every six months to reflect the use of fresh seasonal ingredients. Chef Gibson is also a Chef Advocate for the American Shrimp Association, Chef Advocate for Monterey Bay Aquarium for Sustainable Seafood and has recently joined the NUISANCE Group as a participating Chef and advocate for education and use of invasive species.