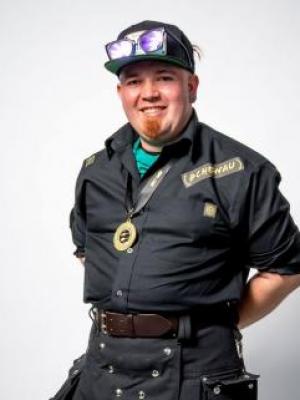 
Chef Chris Nau self-taught alongside the stoves of his mother, grandmother, and grandfather, growing up in a family of Spanish-Mexican heritage in the Bay Area of California. Chris moved to the Pacific Northwest and entered into the world of the outdoors through Boy Scouts and first became a legend as the camp chef. Chris continued his culinary passion by pushing himself through the lines of local Port Orchard restaurants, opening a kitchen under local restaurateur Gordon Naccurato until reaching the Executive Chef of the Bay Street Bistro in 2015. He held that position raising the small Port Orchard fine- dining establishment to Evening Magazine’s Number Two Best in the Northwest behind Canlis. Chris left The Bay Street Bistro in 2016 to open Northwest Root Cellars his own pop-up dining and farm to table catering company. In November, he was invited to compete in the World Food Championship 2016 World Chef Challenge hosted in Orange Beach, Alabama where he placed first in the International Division and Second overall. The competition was featured for the Food Network . He will be traveling to compete in the WFC again in November 2017. Currently, Chef Nau operates his pop up dining company and is at the helm of the Boat Shed Restaurant of Manette, accepting Executive Chef position in January 2017. His personal passions include foraging wild ingredients and working with the local farms of Kitsap County. In his spare time he spends time working on developing his small scale farm with his wife, sculpture, and spray graffiti art. He also is a Jamie Oliver #foodrevolution Ambassador Chef and works on small projects to raise public awareness about eating healthy.