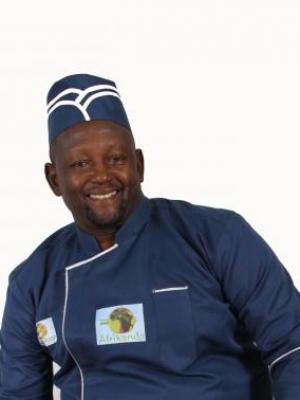 
• DI got interested on culinary way back 1979 when i was employed by Mikumi Wildlife Lodge located inside Mikumi National park in Tanzania as Administrative Assistant. The hotel was under the management of Hallmark Hotels International. There I created in-house training for the staffs that are not in culinary sector especially kitchen and restaurant. The aim was to have a reserve of enough staff in case of any shortage as it was difficult to outsource emergency staffs in that remote area. Myself i was among the trainee and in two years time i was a qualified Continental Chef in hot kitchen. When I left Mikumi Wildlife Lodge in 1980 I continued working on my academy profession as business manager to different companies until 1987 when i went to UK for further development studies in business management. I used to spend my off days working at different hotels and fast food cafes as a kitchen dish washer. There i managed to learn more culinary secrets and most is creativity of signature dishes. From there the idea of running culinary business started to penetrate in my mind. Later on I built a habit of eating quality foods from different classic hotels and restaurant as part of my study, though it was very expensive. Coming back to my country - Tanzania i continued to work as a business manager while at the same time looking for an opportunity to culinary business. In the year 1999 i managed to buy a plot in the capital city - Dar es salaam and built my own restaurant called “Club Afrikando”. The business was opened in 2003 and I quited all other businesses and started serious culinary business as Executive Chef/Executive Director. To-date Afrikando is very famous and most loved eating spot competing with all stars restaurants in the city. Club Afrikando is famous for tasty foods ranging from Mexican dishes, Cajun, Creole, Oriental, Italian, French, Continental as well as African dishes. All our dishes have an added value from its origin. We have 2 famous signature dishes that you can’t find anywhere in the world. One is our fries “AFRIKANDO CHIPS” and another is a chicken soup know as “AFRIKANDO CHUNGU” (Afrikando tradition pot) See our menus in our instagram account “clubafrikando”. Another thing I am proud of is the way I created my own cooks for Afrikando business. I usually pick typical amateurs and within few months they become Senior Cooks My vision is: 1. To manage a Chefs college which is now under construction and we expect to open in the mid of this year 2016. Already more than 200 students are anxiously waiting for the college. 2. To become the most CELEBRITY FLYING CHEF around continents and WORLD FOOD CHAMPIONSHIP is my platform towards my vision