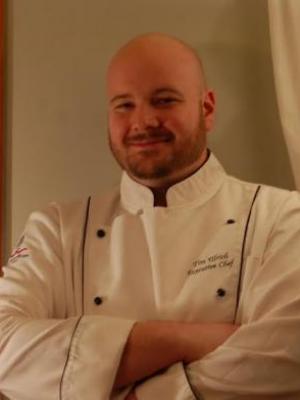 
I graduated from Baltimore International College in 2003 with an A.A.S. degree in Professional Cooking & Baking and a B.A.S. degree in Culinary Management. I officially began my culinary career with ARAMARK at Oriole Park at Camden Yards (Baltimore, MD) in 2002. I earned promotions to restaurant sous chef (2004), restaurant chef (2005) and stadium sous chef (2006). I was then reassigned to the position of Executive Chef of the ARAMARK premium services operations at The Verizon Center (Washington, DC) & Nissan Pavilion (Bristow, VA). Following a successful 2 years of building those culinary programs from the ground up I accepted another promotion to Executive Sous Chef back at Oriole Park in 2009. After another successful 2 year tenure, I challenged myself to test my skills and experience in the private club segment, joining the culinary team at Belle Haven Country Club (Alexandria, VA) in 2010. It was at Belle Haven that my cuisine really began to evolve into what it is today: seasonal, contemporary, bright & bold flavors, classic & modern techniques. Ready for a bigger challenge, I accepted the position of Executive Chef at Johns Hopkins University, once again with ARAMARK. The university chose not to renew its contract with ARAMARK after one year, so once again it was time for another challenge. That brings me to my current role as Executive Chef at Ocean Pines Yacht Club in Ocean City MD.