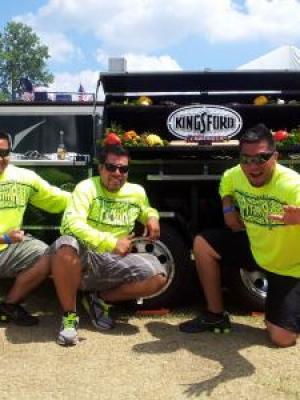 
I began cooking with my Mom outdoors at an early age. She taught me the value of cooking for people to make them happy. Also, to do your best no matter what the situation or ingredients at hand. I take this philosophy into "battle" with me whenever I do a competition. We at Pitmaker are BBQ Engineers. We not only cook great BBQ, but we design and build the best BBQ Pits to do it. Winning the 2013 World Food Championship in BBQ, and becoming Reserve Grand Champion Overall is validation that we are doing it right. Competition cooking to us and our customers is a way of life, as well as a new sport. Our goal is to be champions of that sport and to help our customers who use our products become champions of it, as well. Nothing changes from 2013 to 2014. We aim to be champions again.