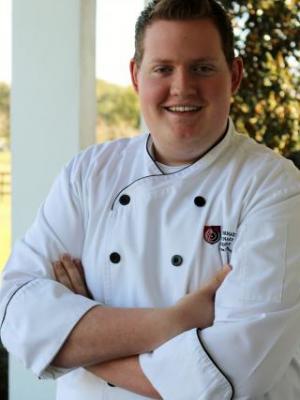 
Chef Devin Davis began his culinary career eight years ago competing in his very first competition that won him a trip to Hollywood, California. Since then his career has grown bringing him to the World Food Championships. Chef Devin's greatest passion in life is food and cooking because everyone loves to eat great food, and great food always brings people together. In addition to finishing his Bachelor's Degree in Restaurant Management, Chef Devin has expanded his repertoire of competitions and accolades and has traveled the country and part of Europe developing and honing his skills and passion for food. Some of his biggest accomplishments are being the winner of an episode of the Chopped Open your Basket Challenge, the title of the 2015 Best Young Chef of the Southeast from the Chaine Des Rotisseurs, and most recently a fully paid trip to Umbria, Italy where he competed in a national competition sponsored by Urbani Tartuffi (a world renowned truffle company) and finished in second place. In addition he studied in an acclaimed Italian culinary school during his time there. Chef Devin learns from every experience and opportunity and attributes his talents and success to God and his very supportive family! His ambition and desire to learn has led him to compete all the way from New York to Las Vegas, Hollywood, and even Italy, and his training and experience has prepared him to bring everything he has to the World Food Championships. This is another huge step in his plans to become a successful restauranteur, entrepreneur, and ultimately a world renowned chef.